Despite the title of this blog, I am actually something of a neat freak.  Although I do flail about and throw flour everywhere while I bake, I’m an extremely tidy cook and am very conscientious about cleaning my condo – particularly the kitchen, since I spend so much of my time there.  But one cleaning chore that I geniunely hate is cleaning the refrigerator – especially the dreaded produce drawers.  Mostly, I hate doing this because it bums me out.  I end up throwing so much away – mostly vegetables that were intended for dinners which never materialized, because I worked late or came home exhausted or forgot about happy hour plans I had made when I wrote my weekly menu.  Throwing that stuff away makes me sad, partly because I hate to waste anything (especially money, and since I shop at Whole Paycheck, it really is like tossing cash down the drain) and because I was really looking forward to those dinners that never happened.

The solution?  Make something out of nothing.  I’m good at this – you should have seen my 1L Torts outline. 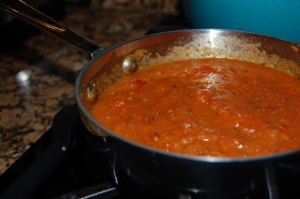 I don’t always succeed, but I try not to get to the point where I have to throw food away.  Instead, once a week I try to do a fridge-clearing meal and actually use those vegetables that would otherwise be thrown out on the next market day.  Because I like alliteration and keeping my husband on his toes, I come up with cute, catch-all names for the dinners, like “Pantry Pasta” or “Fridge Frittata” so that he never knows what he’s going to get for dinner that night.  (Evil laughter.)  These dinners don’t really take to being written down in recipe form, but here’s one I made recently.  Alter as you see fit, depending on what’s languishing in your vegetable drawer…

You can serve this over any pasta that you happen to have in your pantry.  I served it over whole wheat spaghettini, but it would also work well with linguine, penne, rigatoni or cavatappi, either classic or whole wheat.