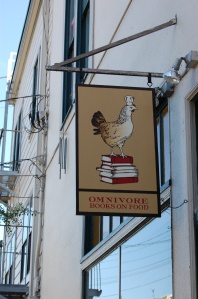 This unique bookstore was on my “must-see” list when hubby and I were in San Francisco.  I mean, really, a whole bookstore devoted to cookbooks?  Antique cookbooks, vintage cookbooks, rare cookbooks, new cookbooks?  Sign me up!  I knew I had to check this place out.  So hubby and I fortified ourselves with a good breakfast, hailed a cab, sharpened our elbows, and got ready to fight tooth and nail for the best deals.  As it turned out, cookbook collectors are pretty peaceable people – who knew?  (I once went to a wool festival and came home black and blue after a little scuffle near the cashmere – which I did NOT start, by the way – so I’m now ready for anything.)  I spent a blissfully happy hour or so thumbing through some fabulous old cookbooks while hubby waited patiently nearby (imagining the treats in store for him, no doubt) and I scored some pretty amazing deals.  Behold my haul…

In no particular order… 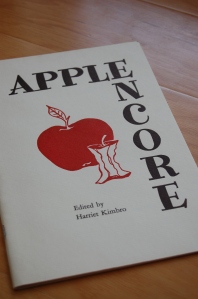 Is this 1976 limited-printing booklet called “Apple N Core” or “Apple Encore”… ?  I’m not sure, but I know one thing: it’s a hoot!  This booklet was limited to 500 copies and this here is a first (and only, so far as I know) edition.  It has recipes for everything from apple cake to apple barbeque sauce, with other tidbits like apple history, bios of famous apple-philes, and instructions on how to make an apple doll.  Like I said, an absolute hoot. 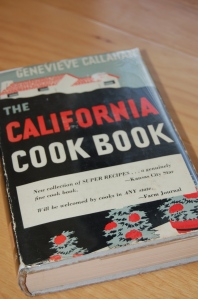 I don’t really know how this cookbook found its way home with me…  You see, I was just flipping innocently through the “California” shelf and I happened to notice that this 1949 Third Edition boasts the “debut” of Green Goddess dressing!  I love Green Goddess dressing, and to me it simply screams California.  So, I let it jump into my basket as a special souvenir of my California trip. 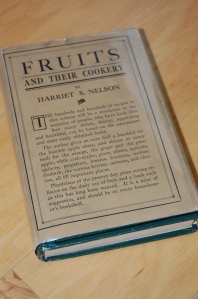 Here is a real treasure… a 1921 first edition cookbook dedicated solely to fruit.  The cover promises medicinal benefits to be obtained from the “commonest and most easily obtained fruits” – a revelation to the cooks of the 1920s, it seems!  The cookbook features classics such as “Dutch Apple Pie” and “Peach Cobbler,” adorably vintage-sounding dishes such as “Pineapple Delight” and “Apricot Ice For An Invalid,” and some recipes that read avant-garde even in the foodie culture of 2009, such as “Blackberry Vinegar.”  Expect to see some of Harriet S. Nelson’s fruity concoctions on here before long… but not before I do a bit of tweaking.  Harriet was enthusiastic about fruit, to be sure, but she wasn’t as big on prosaic things like measurements or oven temperatures or cooking times.  I plan to do a bit of updating and tinkering with this one and I’ll be sure to share my discoveries with you.

Hurray!  I’ve wanted my own copy of Beard on Pasta since I read Molly Wizenberg’s ode to braised onion pasta sauce.  Alas, it’s out of print.  But now, here it is, my very own treasure of a cookbook… and a first edition, no less!  The pasta gods are clearly smiling on me.

Omnivore Books On Food also sells new cookbooks, some of which are on my wish list and did look tempting.  Still, I consciously steered myself toward truly unique, special books that I couldn’t get on Amazon, with the resulting bounty. Stay tuned for recipes!

3 thoughts on “Omnivore Books On Food”