Our final stop on our 2008 tour of England was the only stop in the south of the country: London.  We spent our last few days exploring the city before boarding our flight back to D.C.  It was a whirlwind couple of days (we’re excited to having more time in London on this trip, so we can explore more fully but not feel as rushed).  We packed an entire city’s worth of sights into just a couple of days…

First evening in London: we strolled across the Thames to visit Tate Modern and check out the Milennium Bridge.

The next morning, we headed straight for the Tower of London.  The skies were blue, the Beefeaters were hilarious, and the Crown Jewels were goooooooorgeous… but it was still a pretty imposing, scary place.

Tower Bridge.  I’ll get a better pic on this trip, promise!

Over to the British Library – one of my personal “musts” for any trip to London!  The highlight for me was seeing the words “Reader, I married him” written in Charlotte Bronte’s own handwriting.  Experience. Of. A. Lifetime.

This gentleman would like to welcome you to the British Museum.  Funny story: we hopped a cab on our way there.  When we told the cabbie where we were going, he said, “Ohhhh, yeah, we’ve stolen some marvelous stuff.”  That British humor, that just slays me.  (Later in the cab ride, we somehow got on the topic of Harry Potter.  The cabbie took an appraising look at hubby – who was wearing his glasses that day – and said quite seriously, “You know, you look not unlike Harry.”) 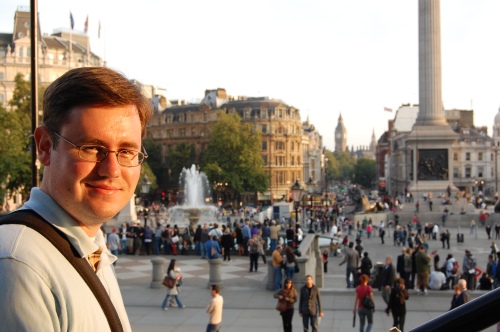 Here’s my Potter lookalike himself, taking a break on Trafalgar Square after a closing-time race through the National Portrait Gallery.  (I really wanted to see the Jane Austen portrait and rather outstayed the museum hours looking for it.  Fortunately, the museum guards are friendly and helpful, and I did get to see Jane.)  This is one of my favorite snaps of hubby – I have a 5×7 copy framed on my desk at work, so I can see my favorite guy and one of my favorite cities whenever I want.

The graceful Christopher Wren-designed church of St.-Martin-In-The-Fields.  Lovely church.  (Sorry no pictures of St. Paul’s, here, Wren fans.  We visited at twilight, which was beautiful, but not good for picture-taking.  I have some shots, but they’re so blurry they’d make you seasick.  I’ll try to do better this time.)

A grey morning at Parliament.

We meandered through Westminster Abbey, which I loved – Queen Elizabeth I!  Mary Tudor!  Chaucer! – but hubby called “a cluttered monument to human vanity.”  Someone has no appreciation of history.

They’re changing the Guard at Buckingham Palace.
Christopher Robin went down with Alice.
Alice is marrying one of the Guard.
“A soldier’s life is terrible hard,” says Alice.

Another personal “must” in London – high tea at the Orangerie at Kensington Palace, a.k.a. Queen Victoria’s greenhouse.  Champagne, sculptures, miniature orange trees on each table, meringues, and… oh, right… delicious tea.  Not to be missed. 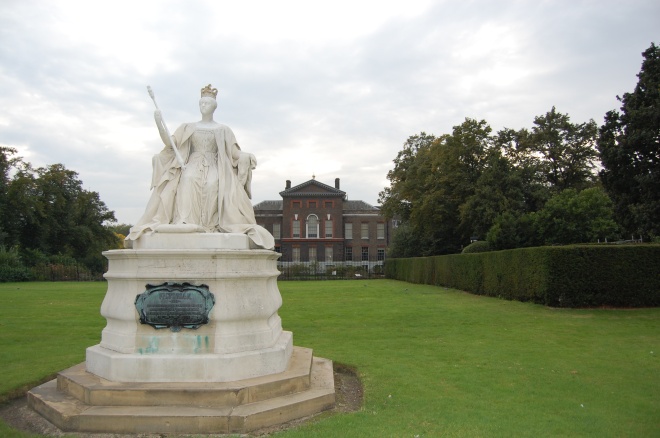 The Lady herself: Queen Victoria outside Kensington Palace.

And the gorgeous Sunken Garden, where I could have sat for hours.

And of course, no visit to Kensington Gardens is complete without stopping to say hello to Peter Pan. 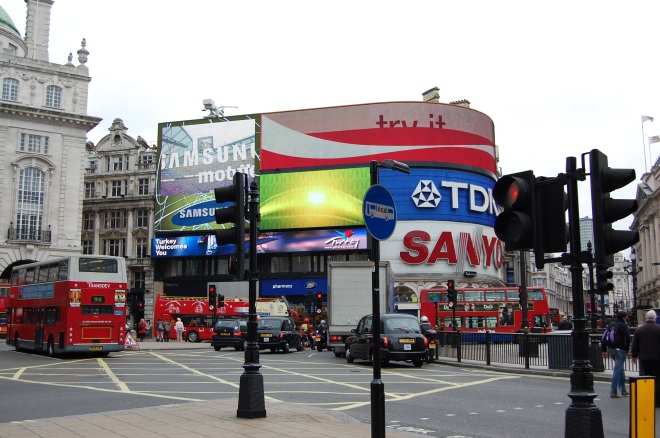 On our last morning in London, we stopped by Piccadilly Circus… both so we could check it off a “want-to-see” list and so I could visit the enormous Waterstone’s bookshop to pick up reading material for the flight home.  (I ran out of pages on that trip.  Won’t happen this time.)

Cheers, London!  We’ll be back soon!

And so ended our 2008 trip to Great Britain.  Thanks for coming with me on this trip down memory lane!  The next travel series will be a recap of our 2011 circuit through southern England.  Stay tuned…