In Bath, we immersed ourselves in history as far back as Roman times.  Then we left town and traveled even further back in time – back to the ancient peoples of Britain – mysterious societies who erected massive circles of standing stones that we may never fully understand.

Our first stop was Avebury, called “the connoisseur’s stone circle” by some.  Avebury Stone Circle is an impressive construction of standing stones, a quarter mile wide, encircling a small hamlet that grew up in between the stones.

The stones were massive, and some of them appeared to be balanced quite precariously – but they were all standing very solidly.  Avebury is not nearly as well-known as its close neighbor, Stonehenge, but it was fascinating – not least because visitors were permitted to wander at their leisure amongst the stones and even touch them (unlike Stonehenge, which is fenced off from crowds for its own protection).  The people of Avebury have taken care of their stones – except for the time when they pulled them all down in a spurt of religious enthusiasm.  We took our time meandering around the circle.

You can get a good sense of the size of the stones – hubby is six feet tall, and this stone (which wasn’t even the largest) dwarfed him.  Pretty impressive!

From Avebury we headed a short drive to Stonehenge.  Stonehenge is a wildly popular protected site.  Unlike Avebury, it’s touristy, expensive, and roped off.  But it’s completely worth a trip.  We wandered around the circle, snapping pictures from every angle and debating that age-old question: who put these stones here, and why? 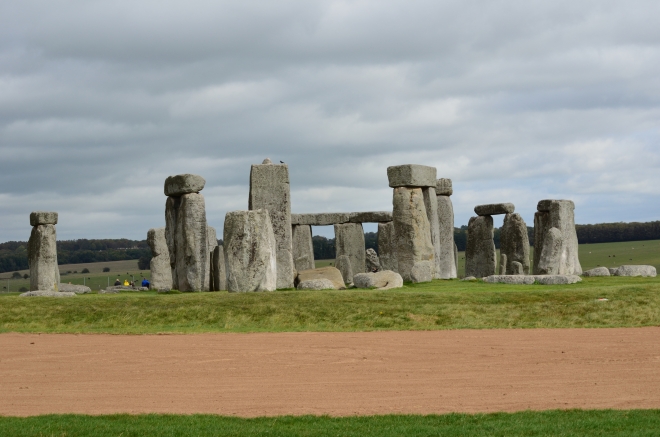 Come back next Friday for the next stop on our tour of southern England!

5 thoughts on “Avebury and Stonehenge”