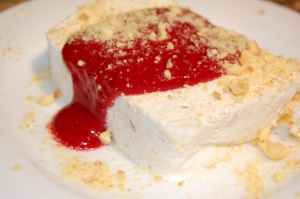 Here’s another one from the archives that I thought would be fun to pull out as the mercury climbs all up and down the Eastern seaboard.  Yesterday on the radio, the host said “Today is the first day of summer,” and while that’s technically correct, it feels like summer took up residence in D.C. several weeks ago… at the very least.  Even walking outside for frozen yogurt is heat headache-inducing.  So make this semifreddo in the air-conditioned comfort of your own kitchen.  If you’re not sweltering right now, I’m jealous of you.  But you can still have semifreddo.

For dessert on our anniversary, I wanted to make something simple and refreshing (it is August in DC, after all), something that seemed special and unusual, and most of all, something that wouldn’t require me slaving over the stove when I ought to be drinking wine and relaxing with hubby.  A semifreddo perfectly fit my requirements.  I had made one before – once – a few years ago for an Easter dinner with my parents and their close friends (practically my second set of parents) and it had been the most popular dish of the meal.  I started thinking back to that semifreddo and wondering why I don’t make them more often.  They are simple, easy, light, refreshing, and people go crazy for them.  Plus, semifreddo is a frozen dessert that doesn’t require me to lug out my ice cream maker.  What more could I want for an anniversary dessert?  I whipped this up early in the morning before work and it sat in the freezer all day.  10 minutes of beating eggs and cream in the morning, and dessert was just about done.  It doesn’t get much better than that!

Yield: Serves 8-10 (or 2 for an anniversary, with considerable leftovers!)

Note: I think this would also be nice with sliced almonds substituted for the crushed tea biscuits, but my husband doesn’t care for nuts running amok in desserts, so I stuck with the recipe’s recommendation on that one.  If you try substituting sliced almonds, though, tell me what you think!

One thought on “Recipe Rewind: Lemon and Almond Semifreddo”