Recently, while scrolling through Facebook, I came across an article from Outside Online discussing the troubling phenomenon of declining national park visitation by “young” people.  (The article, while it noted that the number of national park visitors under age 15 had dropped in half, did not define exactly what it meant by “young” people – so readers were left to guess whether the decline was among children, teens, or twenty- or thirty-somethings.)  Although the numbers of people visiting national parks are still sky-high, most visitors (and employees) are of the Baby Boomer generation.  For example, the article noted that the average age of visitors to Denali National Park is 57 years old.  The article went on to posit that “young” people are too “plugged in” (read: attached to their smartphones) to enjoy the outdoors.  (Tell that to my hiking, skiing, snowboarding, windsurfing, ice climbing brother and sister-in-law.)

I found the article through the Adirondack Mountain Club, which I follow on Facebook.  The club asked followers whether they thought the Adirondack Park was experiencing a similar youth drought.  I scrolled through the comments and found that the vast majority agreed that there was no such phenomenon going on in the Adirondacks.  The park remains wildly popular among all ages – especially the High Peaks area. 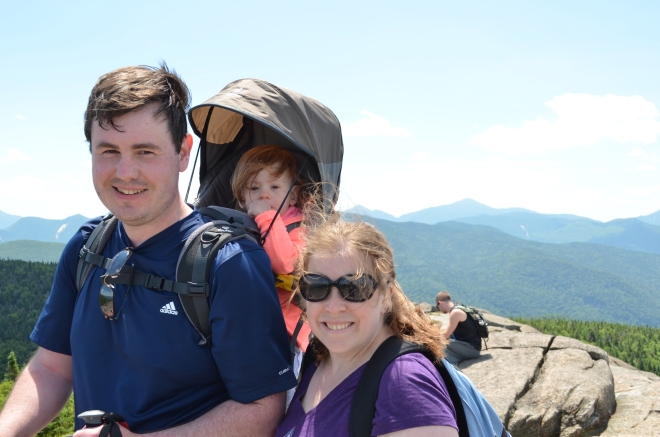 (Family photo from this summer, snapped atop Cascade Mountain, one of the forty-six Adirondack high peaks.  Triumphant, sweaty, and entirely unaware that a microscopic Nugget had also made the climb with us.)

While the comments from fellow ADK enthusiasts were encouraging in their conviction that the park would remain popular with young and old alike, there were a few crusty types who complained that the trails were too crowded, and particularly the High Peaks trails.  I can certainly see where those comments were coming from.  We climbed Cascade, one of the most popular of the High Peaks, on the Fourth of July weekend last year, and I can attest to the fact that the trails were swarming with people.  As one of the slower groups – having a wee one with us – we were constantly moving over to let other, faster hikers go ahead of us.  At one point we idled for several minutes while a group of more than thirty preteen girls passed by, chattering up a storm.  When you hike on a trail that crowded, it’s hard not to get frustrated by the swarms of people, not to mention concerned about the impact of all those boots, all those poles, on the trail itself.

I wouldn’t change a crowded trail.  I love seeing other faces out in the wilderness, waving hello and exchanging friendly greetings with like-minded hikers.  I like the feeling of being in good company.  And, as a woman, I feel safer on a populated trail (although I never, ever hike alone anyway – I’m always with hubby or a friend). 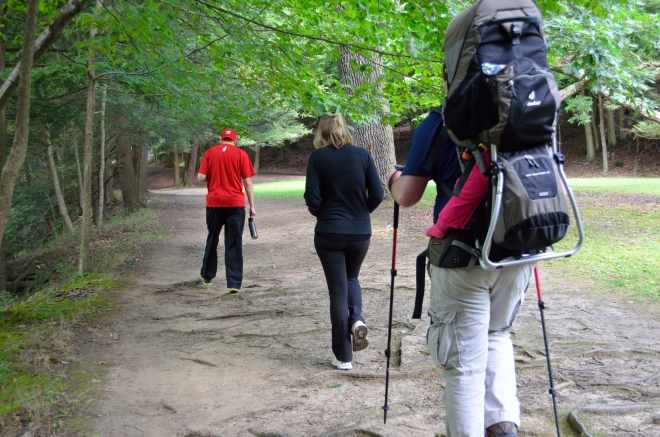 I used to be a hiker who preferred an isolated trail.  (Isolated except for my companions, that is.)  The best outing, in my opinion, was one where I didn’t see another human being other than whatever human(s) accompanied me to the trail in the first place.

Then I hiked in England and Scotland. 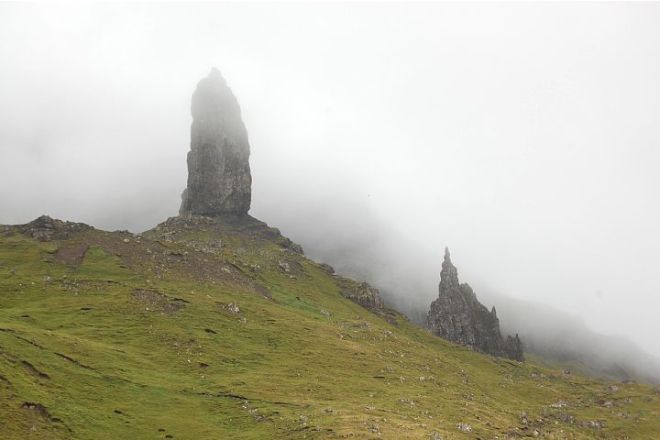 (The Old Man of Storr, Isle of Skye, Scotland.  Don’t let this picture deceive you – this trail was hopping.)

Hubby and I planned several hikes for our 2008 trip – most notably in the Lake District and in the Scottish Highlands.  And I was immediately struck by how well-used the trails were there.  The English and Scottish hikers (and the hikers we encountered from other parts of the world, who’d traveled a long way to walk these paths as we had) really embraced their outdoor spaces and put feet on the trails in all weather.  Where in the U.S. we were accustomed to sparse trails even on beautiful, sunny days, in England and Scotland we saw the opposite – trails that attracted hikers (or “walkers” as they call our type over there) in all weather and all seasons.  And far from being dismayed by how heavily used the trails were, I loved it.

(Buttermere, in the Lake District, on a beautifully foggy day.)

I loved seeing the evidence, with my own eyes, that people were out and about and enjoying the natural beauty of their surroundings.  I loved the way the National Trust stationed a guide at the end point of the trail around Buttermere, and the fact that he was asking each person coming off the trail, “Did you have a nice walk?”  (Answer: yes, very much so.)  I loved the way people were not dissuaded by weather or any other concern – they just got out there.  And I loved knowing that, as popular as the trails were, that meant that most likely, they’d be kept and maintained for future generations of hikers (walkers) to enjoy.  It was the first time I really made that connection: if a trail isn’t popular, there’s no incentive for the powers that be to keep it up.  And by contrast, if it is popular, it’s more likely to be protected.

Some of the commenters on the Adirondack Mountain Club’s post of the Outside Online article might say that’s “playing politics.”  Maybe it is.  Wouldn’t it be nice if politicians protected our great natural spaces, not because there’s anything in it for them (votes) but because it’s the right thing to do?  Sure.  That would be great.  And in a perfect world, that would be the only motivation necessary to protect our beautiful natural wonders.  But as I’ve learned from watching Ken Burns’ documentary “The National Parks” (still working on that one – it’s long)… it doesn’t always work that way.  So if we want politicians to respect and preserve our natural wonders, we have to prove it worth their while.  And the best way to do that is to use those spaces.  Lots of us.

Of course, we have to be responsible about it.  We have to pack out our trash.  We have to leave the landscape as we found it.  That’s just good sense.  But we do have to use these spaces, these trails.  You’ll never find me frowning at a fellow hiker.  I’m glad we’re out there together, using and enjoying the resources we have.  (Even if I do make a sport of finagling pictures without another human soul in them.  There’s usually a few people milling about, just out of the frame – and I like it that way.)  The more popular a trail is, the better I like it these days.  Because I want Peanut and Nugget to have access to these trails for many years to come.  And their kids too, and their grandkids.  (Hopefully I’ll be invited along on some of their adventures.)  And I believe that if folks are out there, showing that they use and appreciate these natural gifts, people are more likely to be enjoying them fifty and a hundred years into the future.  Isn’t that what we want?

So, to my fellow hikers, I say: it’s great to see you out here.

16 thoughts on “In Praise of the Well-Traveled Trail”