When my family used to vacation on Hatteras Island when I was a kid, we had a pretty iron-clad routine: sound in the morning (the dads would windsurf, the moms would sit in the sun and read, and the kids would splash in the shallow water), then lunch, then ocean beach in the afternoon.  We mostly stuck to that routine on this trip, too, although it was a little harder to get into a good groove because we couldn’t split for the beach right after lunch – instead, we had to wait until Peanut finished her nap.  Most afternoons, that meant getting to the ocean (a 5-minute drive away) after 4:00 – not leaving much time for beach play before we had to go back to the house and get showered and changed for dinner.  Still, we made the most of the time we did have at the ocean beach.  I love watching the waves crashing up against the sands! 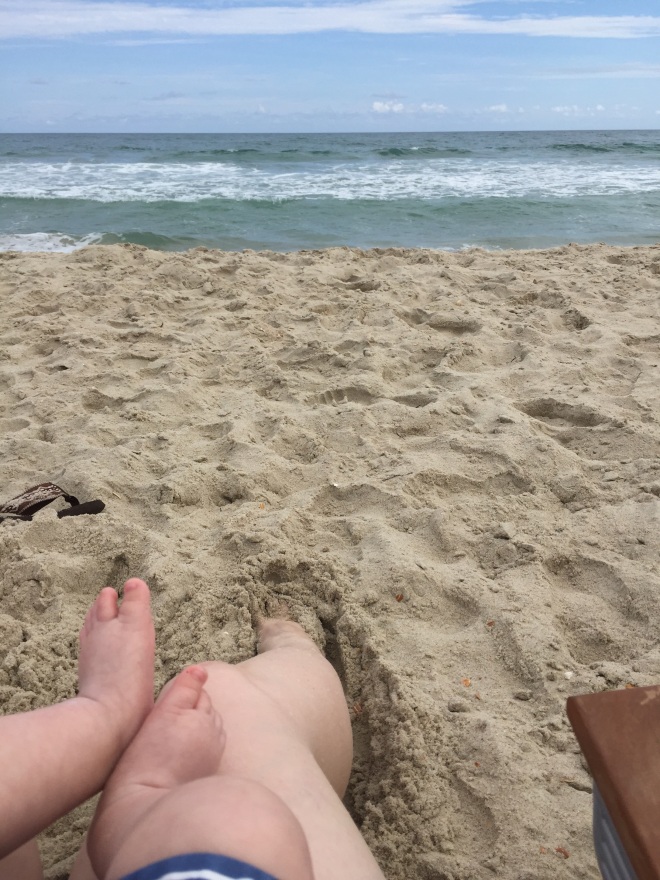 On our very first day at the beach, Nugget had his toes dipped in the surf.

He wasn’t quite sure what to think.  He wasn’t opposed to it, exactly, but he wasn’t overjoyed either.

Peanut, by contrast, had definite opinions about the ocean.  Specifically, she was violently anti-swimming.  She spent most of our beach time sitting on the towel and digging in the warm sand. 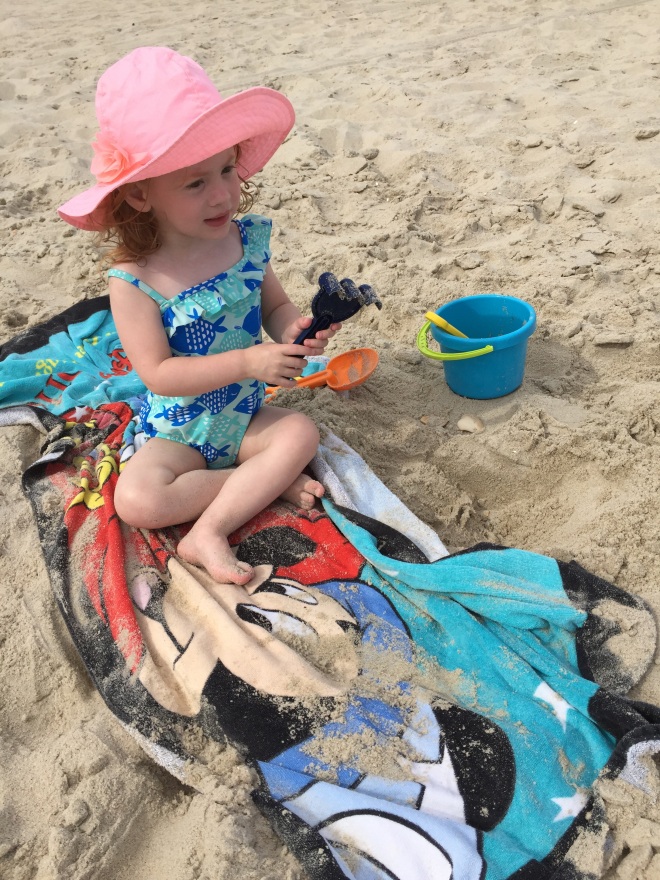 If one of us did carry her to the water’s edge, she clung to us like a barnacle and whimpered until we took her back to the towel.  I know some members of our party were pretty bummed that she didn’t want to play in the water, but I personally did not want to push the issue.  The beach is supposed to be fun, after all.  So we let her have fun in the way she wanted to.

Fortunately, Peanut was willing to partake in a very important Hatteras tradition: burying Uncle Dan in the sand. 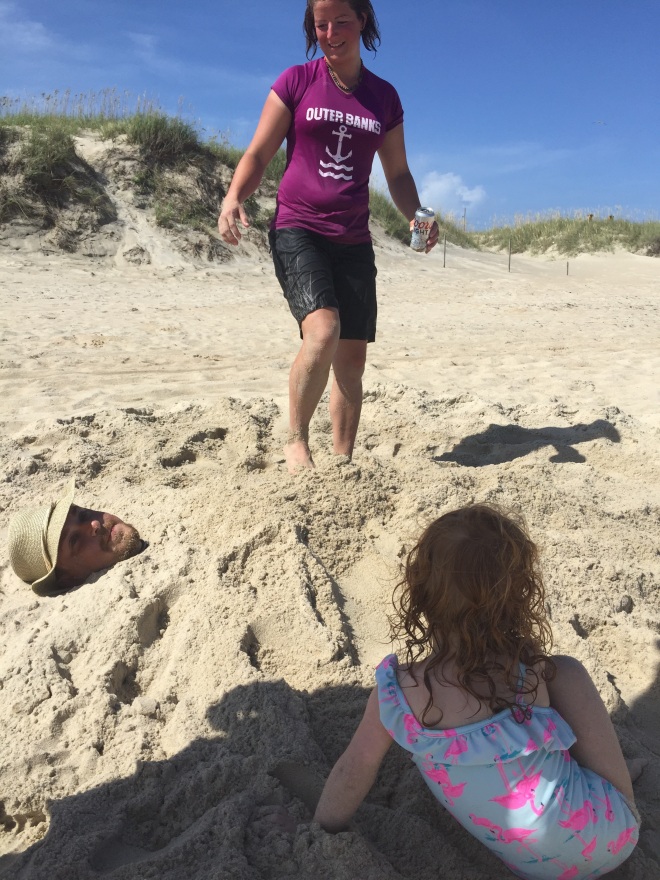 It’s not an official vacation until Uncle Dan is neck-deep in sand with a ladies hat on his head.

Aunt Danielle was totally into it. 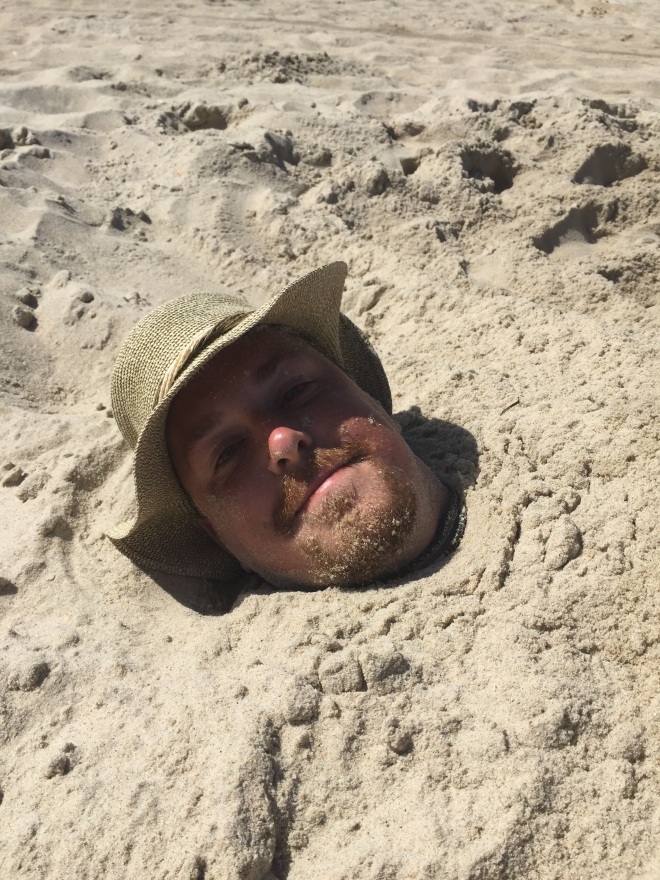 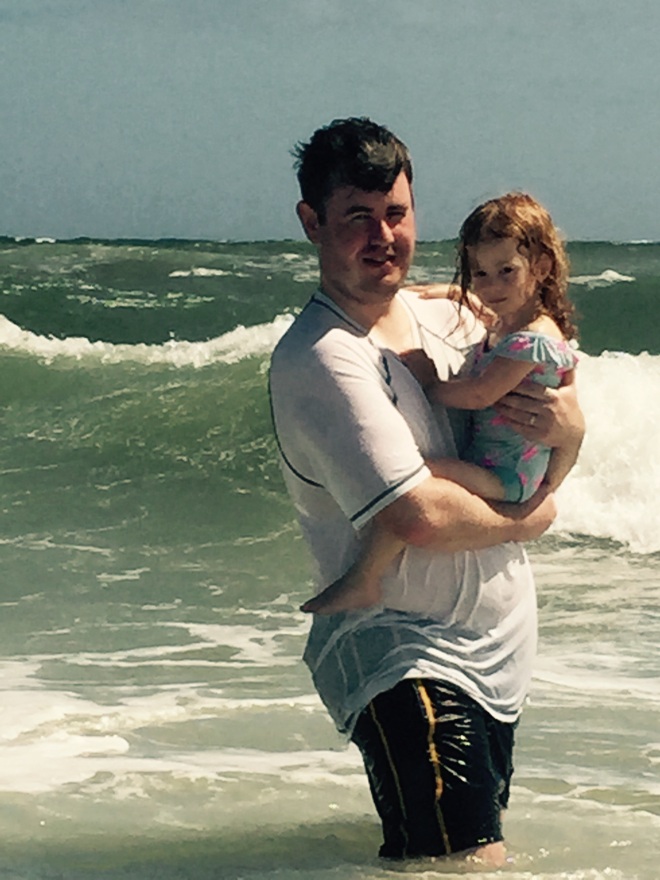 Peanut did get braver as the week wore on.  By Wednesday she consented to let Steve carry her into the surf as long as he did not attempt to put her down or get her wet at all.

Nugget did not have similar scruples.

Well, maybe.  No, I swear, he had fun.  Uncle Dan and Aunt Danielle are good swimming buddies.

Finally, by Saturday afternoon, Peanut was ready to cautiously dip her toes in the water.  And guess what?

It turns out… the ocean is AWESOME, MOMMY!

She spent a good half hour scampering in and out of the waves, shouting “One, two, three… WATER!” and running toward the crashing surf until someone scooped her up.  Seriously – the last half hour of our beach time, on the last day of our vacation, she became a total fish.  I wish we were staying for a second week; I felt badly that she missed out on swimming fun all week.  Maybe I should have pushed her more, but she was so frightened of the ocean earlier in the week, and I just wanted her to have a good time.  At least I know that next time, she’ll be into it!

Next week, a fun excursion to a neighboring island!