2015 was quite a year in reading!  I started the year off in a reading slump, which I was starting to think might just be my new normal.  After slow months in January and February (four books each month) things picked up and I got my mojo back, oddly enough, once Nugget arrived in March.  As I type this post up on December 31st, my calculations show that I read 94 books this year, or 28,203 pages, which I think is pretty darn great for a year in which I had a newborn and a toddler, a job, and a house on the market.  Reading has always been a source of comfort and contentment for me, and I think that really shows when you consider that with everything I had going on, in my sparse free time, I chose to turn pages.  And, for the most part, I enjoyed myself – according to Goodreads, I only rated one book one-star (“didn’t like it”) this year: Go Set a Watchman.  By contrast, I gave five stars (“it was amazing”) to fifteen books – so either I’m an easy grader, or I read some great stuff this year.  My longest book, at 656 pages, was The Fellowship, and my shortest, at 112 pages, was Best Easy Day Hikes: Buffalo. 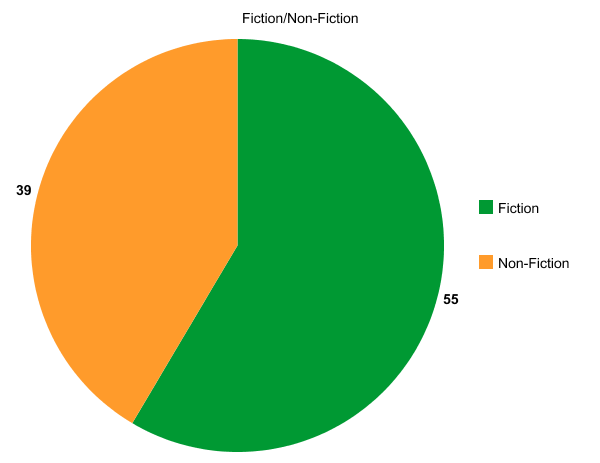 I’m not at all surprised to see that I favored fiction in 2015.  I am a little bit surprised to see that the scales weren’t tipped quite as far in the fictional direction as they usually are.  55 fiction, and 39 non-fiction, is probably as close to evenly split as I’m ever going to get.  And as I’ll get into in more detail next week, when I share my top ten reads of the year, some of my favorite books this past year were non-fiction.  Either I’m growing as a reader, or there has been a lot of good non-fiction out there recently, or both.  I’ll take it.

Is anyone surprised that out of 94 books read this year, 74 of them came from the library?  No?  Me, neither.  Let’s move on.

(Next year I swear I’m going to #ReadMyOwnDamnBooks.)

A couple of noteworthy things about my fiction reading this year: for one, I think it’s pretty well spread out over genres.  (You’ll notice that sci-fi and fantasy are missing; that was an oversight when I was mining the data, and by the time I caught it, it was too late to go back and re-count everything.  So the sci-fi and fantasy novels I read this year – and there were a few – got lumped into other genres, namely literary fiction, general fiction, and YA, depending on where I thought they fit best.  Sorry about that!)  Next, I need to read more classics if I’m going to make it through the Classics Club challenge.  But while I was disappointed in only six classics, I was pleased to see 16 literary fiction titles.  The other noteworthy thing?  Fourteen comics!  (I know, as Kim pointed out in her 2015 wrap-up, comic is really a format, not a genre, but this is how it makes sense in my head so I’m counting it this way.  The two non-fiction comics I read, which were both graphic memoirs, were assigned to the memoir genre below, so they’re not counted as “comics” here.) 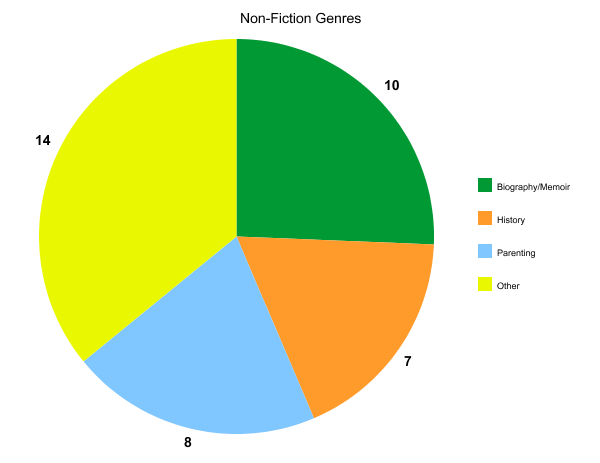 The one thing I have to point out here is that my “other” category really got out of control.  Books I shelved as “other” mostly belonged to one of two genres: time management, or social science (or, in the case of Overwhelmed, which was one of my favorite reads of the year, both) and I really should have broken it out further.  But, as with sci-fi/fantasy in the fiction chart, by the time I realized that there was a better way to mine the data, I was too far into it to want to go back and start over.  Anyway, I read some great non-fiction this year.  I really enjoyed the history and memoir books I read, as I usually do, and probably at least a couple will find their way onto my top ten list for the year.  Less enjoyable was the parenting book bender I went on for awhile last spring before I cut myself off (I was starting to feel like the world’s worst mother, which I know is not remotely the case, and I decided I’d stay saner if I took a break).  But 2015 really was a great year in non-fiction – with new Erik Larson and new Sarah Vowell, what more can you ask for?

That’s all the data I collected this year, unfortunately.  I’m not great about tracking my books through the year, so while I’d love to see more information about my reading trends (for example, male/female breakdowns, author race, setting of books, etc.) I don’t have the time or inclination, this year, to wade through all of my old book review posts and try to figure that out.  In 2016 I’m planning to track my books on a spreadsheet and I’m hoping that, if I keep up with that, I’ll have more information at my fingertips next December.  I’m also hoping for more representation by authors of color, more classic literature, and more settings outside the United States and England – so we’ll see how I do with those goals!