We started the weekend in our current favorite way – with a trip to the playground and farmers’ market at Island Park.  It was just me and the kids for most of the morning, as Steve was off running errands in preparation for his dad’s retirement party, which he planned.  Peanut, Nugget and I missed Dad while he was running between Wegmans and Party City, but we made the most of the morning on our own.

There was sandboxing.  Island Park has the best sandbox in Williamsville – so many trucks! 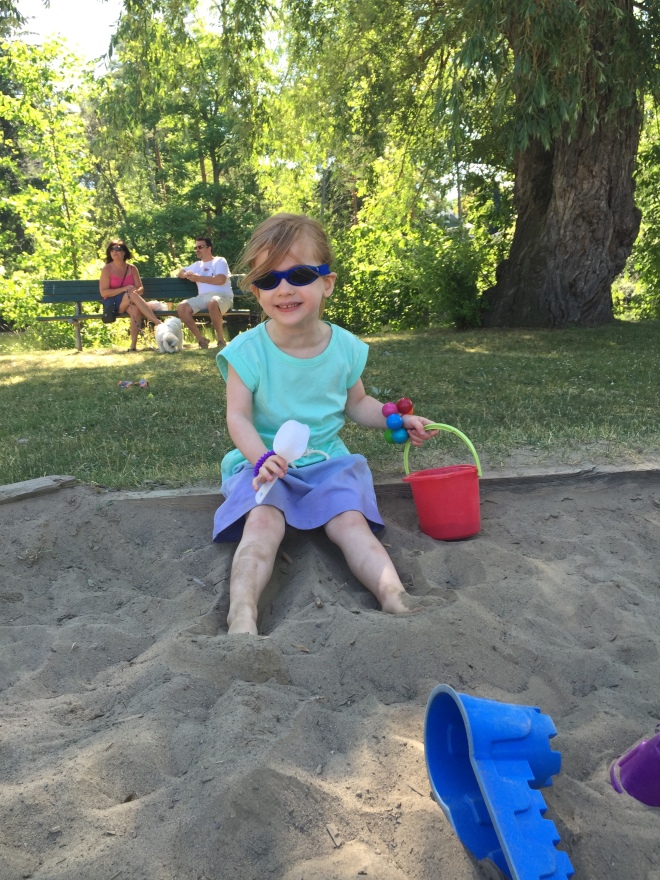 Peanut baked me a strawberry cake.  It tasted like sand.  But you know, baking takes practice.

And Peanut also alternated between riding a horse and a train engine.  She probably spent half an hour going back and forth between the two rides.  (What do you call these things?  It’s not a rocking horse.  I don’t know.)

Eventually, Dad finished his errands and joined us at the park.  We were all excited to see him, but Nugget most of all, because he got someone to hold him up on the horse without being subject to Peanut’s whims.  (I could hold him up and help him ride only when she was in my immediate vicinity, but she tends to want to wander off – that’s the three-year-old attention span for you.  Obviously, she can’t wander around the playground alone, so Nugget had a lot of truncated horsey rides when I had to grab him and chase after Peanut.)  After the kids had their fill of the playground, we took a quick spin through the Williamsville farmers’ market, grabbed a quart of strawberries and a couple of apple cider donuts, and were on our way.

The rest of the day was low-key – lunch at home for both kids, then errands for Nugget and me while Peanut napped away the afternoon.  Rest was key, because we had a big plan for Sunday morning…

Berry picking!  Last year, I took the kids berry-picking at Awald’s Berry Patch and we had a blast.  Steve couldn’t join us (he was out of town attending a family funeral) and I knew he would love it there, so we made a note to come back for a repeat visit.  And this year, we were joined by some friends – Peanut’s friend N from school, and her lovely family! 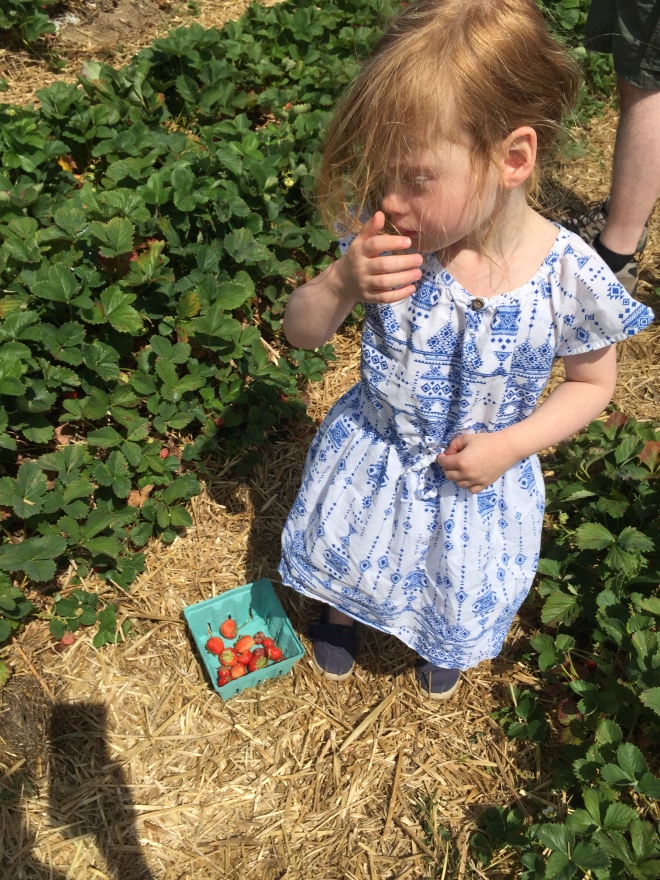 Although we had a fabulous time with our friends, the picking itself wasn’t as successful as last year.  There were two reasons for this: first, we came at kind of a weird time – strawberry season was all but over, but the blueberries were only just beginning to come into ripeness.  Last year, I brought the kids to the farm later in July, so we completely missed strawberry season but had tons of blueberries to choose from.  The other reason that we got more berries last year was Nugget – last year he was an adorable little lump in a stroller; this year he was a whirling dervish of energy and wanted nothing more than to run into the parking lot and greet all of the vehicles.  I spent most of the morning chasing him, and as I am the power picker of the family, no one else really picked anything and we ended up with a paltry handful of blueberries.

But we still had a fantastic time!  I realized early on that this was not going to be one of those days when we came home laden with fruit, and that I needed to be fine with that – any pressure to actually pick was going to lead to frustration.  My goal quickly shifted to having a good time with our friends and enjoying the sunshine.

Definitely a success!  Our friends took home a good load of berries (they have a six-year-old who took picking extremely seriously) and we got a big laugh out of our $0.70 worth of blueberries.  I did grab a flat of raspberries from the farm store, so we didn’t go home empty-handed – and again, the only goal was to have a great morning, which we did. 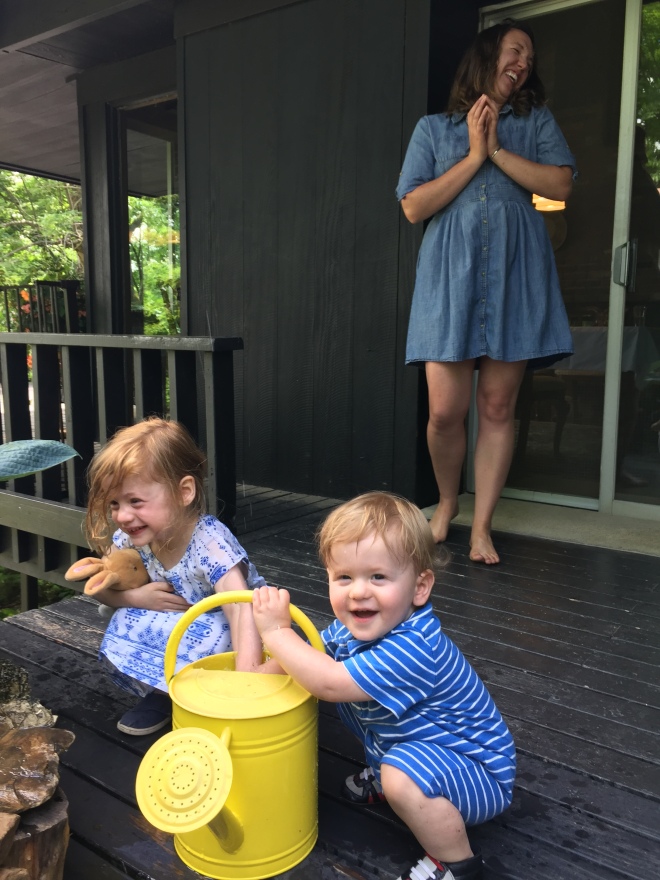 After the berry-picking extravaganza that wasn’t, we headed over to my inlaws’ house for my father-in-law’s retirement party.  We were a couple of hours early, so the kids set about preparing for the party by watering the deck, the fountain, and each other. 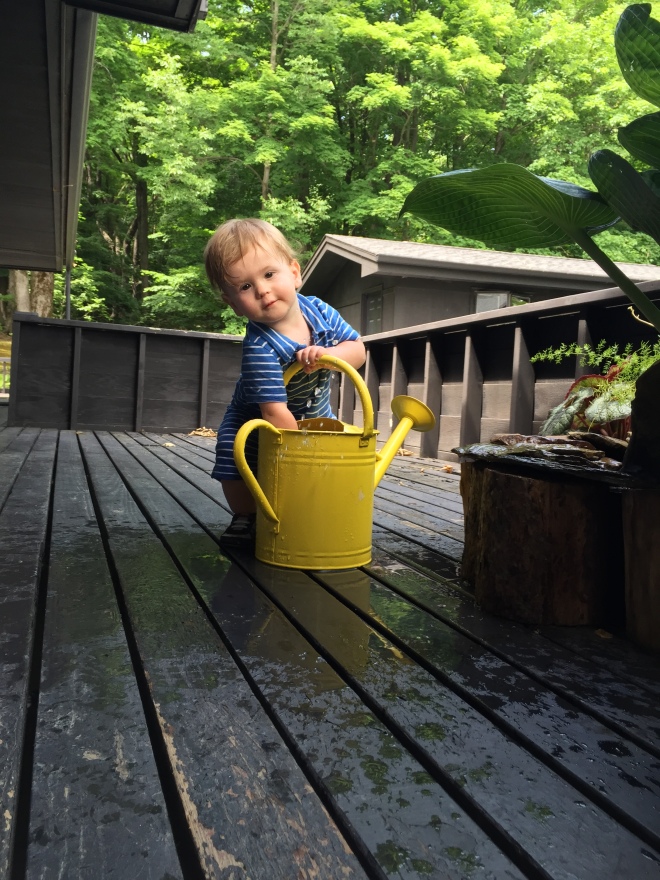 Nugget really loves this watering can.  I don’t know, you guys.  He still screams half the time I give him a bath, but he’ll happily splash for an hour in the watering can.  Can anyone explain that?  So bizarre.

After they got themselves good and soaked, it was time to change them into their party clothes and then begin the complicated dance of “no-you-may-not-play-with-the-watering-can” once they were dry and fancy. 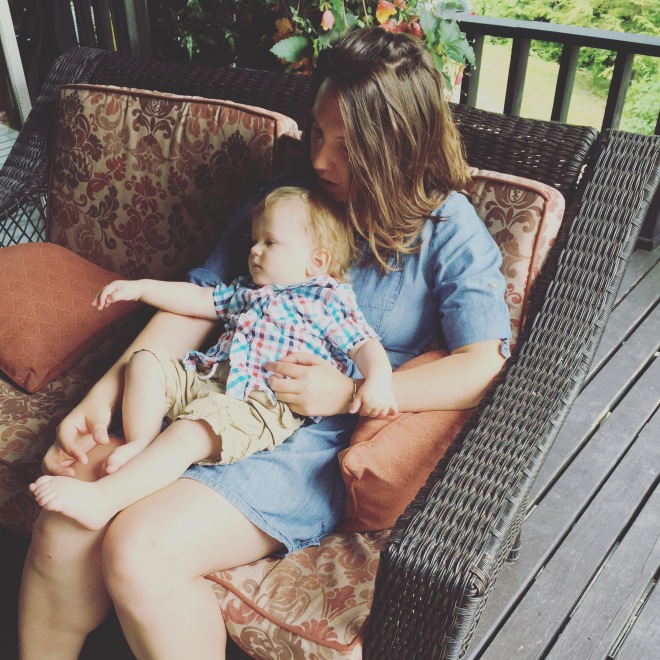 The party was lovely.  It was so much fun to see my sisters-in-law – especially Emma, who lives way too far away.  (It was great to see Grace, too – it always is – but she’s at least local!)  The kids are totally in love with their aunties.  I wish they saw both of them more, but we make sure to maximize the time we do have together.

Bringing us to the fourth!  Whew – anyone still with me?  I do like to pack fun into those summer weekends.  Anyway, the fourth dawned bright and sunny, just like the previous two days – love it!  I have one request and only one request every fourth of July – water, please.  It’s not a proper Independence Day unless it’s spent by a body of water.  This year, like last year, we hit Canalside – our favorite spot in the City of Buffalo for family fun. 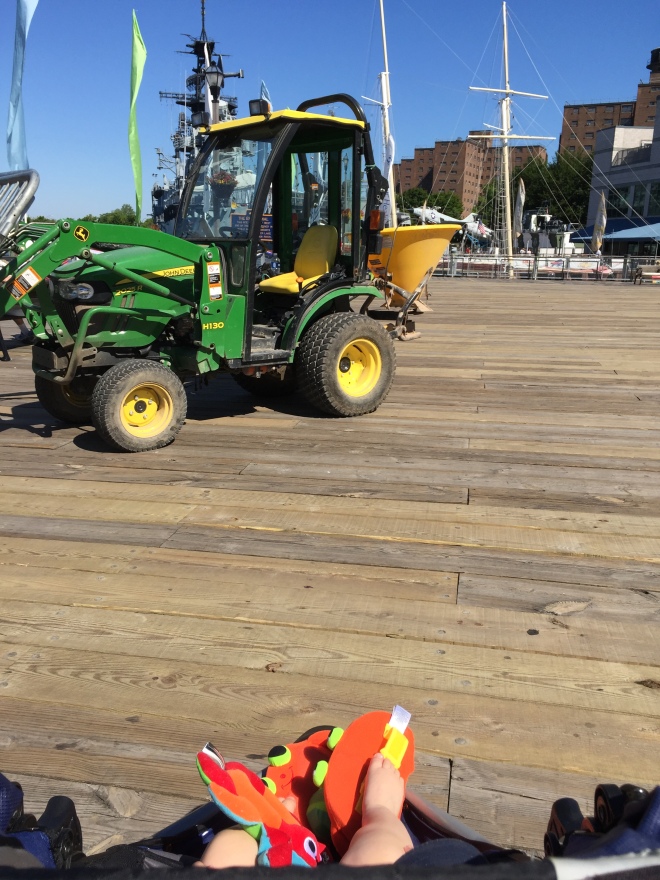 There was sightseeing.  Bye, truck!  (Nugget’s catch-phrase, and not just for trucks – he says “Bye, truck!” to any wheeled vehicle he encounters.) 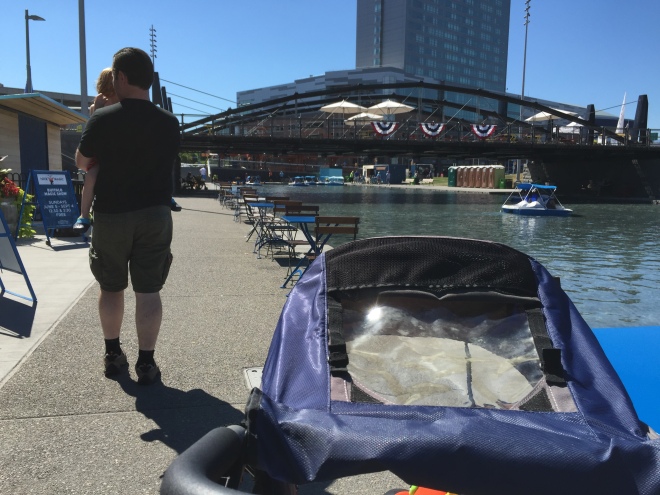 We walked down to the small canals and watched the pedal-boats.  I wanted to rent one, but not with my two crazy kids.  Maybe another time…

The canals are so pretty… I wish we’d made it here for ice-skating last winter.

We checked out an art installation of about a dozen globes, all designed and painted in different motifs by various artists.  The installation has already visited several large cities around the country, and it was such a cool thing to see.  Definitely my favorite public art installation in Buffalo.

Nugget was not as interested in the baseball globe as the rest of us were.  He’ll get there. 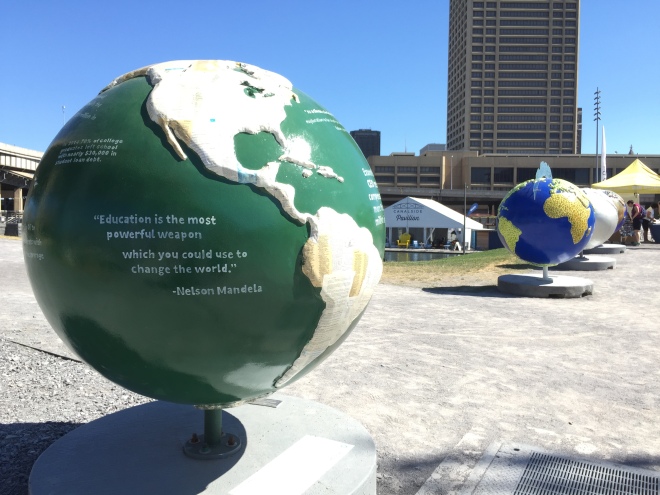 (That last one was my favorite!  It’s hard to show in the picture, but not only was the theme lovely – sustainability and mindfulness – but the colors were almost iridescent.  Gorgeous!)

The kids were so good during our walk – they earned a trip to the EduKids sandbox.  This (huge!) sandbox recently re-opened and we were very glad when it did.  We missed it! 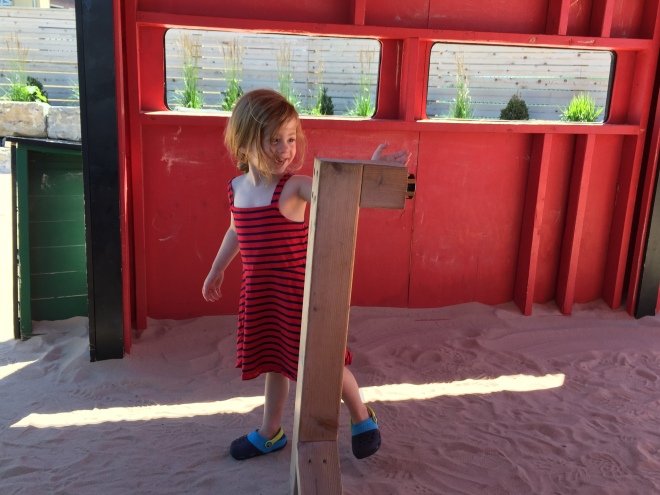 There was a large boat that was added as part of the remodeling this spring.  Peanut decided that it was a pirate ship, and insisted that we call her Captain.  At one point – I was chasing Nugget and didn’t witness this – Steve said that a little boy on the playground was giving Peanut a hard time, and she shouted at him “Don’t make me walk the plank, or my dad will sword you into the ocean!  Dad, SWORD HIM INTO THE OCEAN!”  Apparently the rest of the adults on the playground were bent double over that one.

After the kids played for awhile, it was time for Mom to get her fourth of July treat – a picture of the littles in the mini Adirondack chairs!  For comparison, here’s last year’s (awkward) shot…

Ha!  Nugget was so tiny and so skeptical. 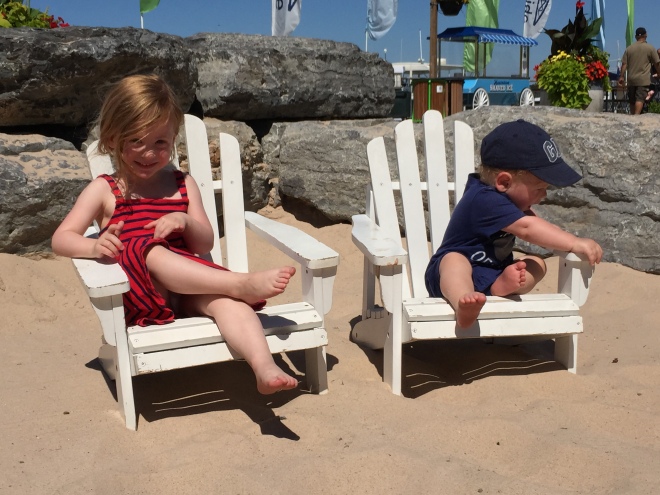 We got them set up in the chairs.  I told Peanut it was a fashion shoot and she was totally into it. 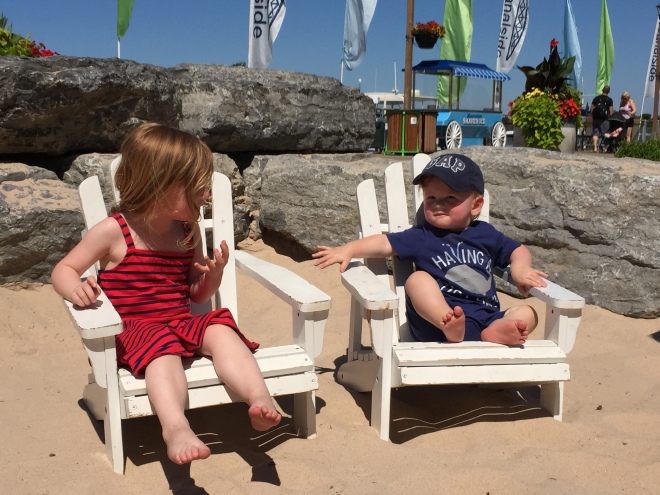 Explaining to Nugget how this whole thing works.  Just humor Mom, kid, and it’ll all be over soon.

What’s this? Two kids looking at the camera and smiling?!  It’s an INDEPENDENCE DAY MIRACLE!

And then Peanut left and climbing happened.  Well, I got my picture. 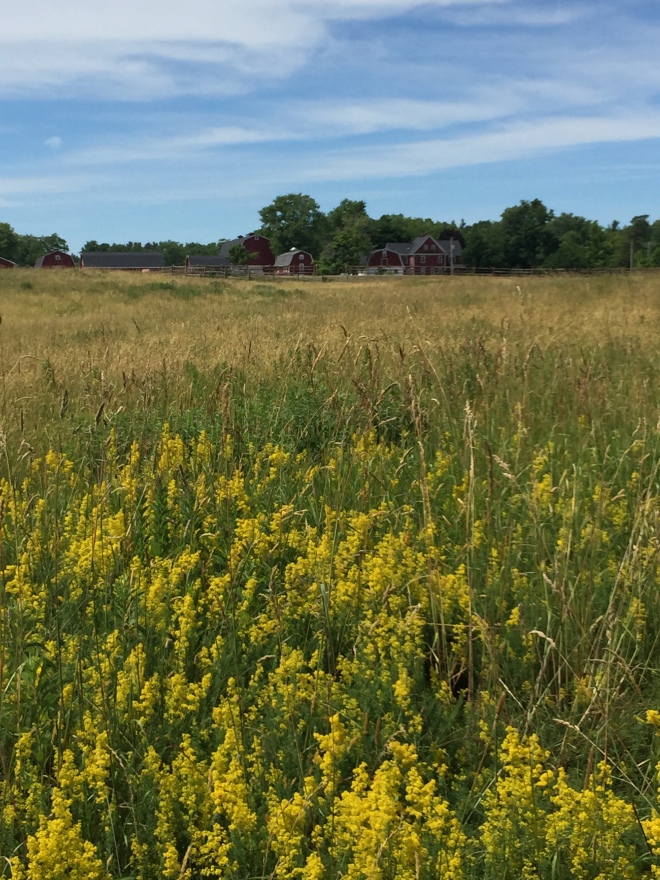 We headed home to another afternoon nap for Peanut, and another afternoon excursion for Nugget and me: Knox Farm!  I wanted a car nap out of Nugget, so picked somewhere a bit far away – I did get my car nap, and then we had a lovely walk; success!

I let the little guy out in hopes that he would run around, but all he wanted to do was inspect the stroller.  Wheels – totally obsessed! 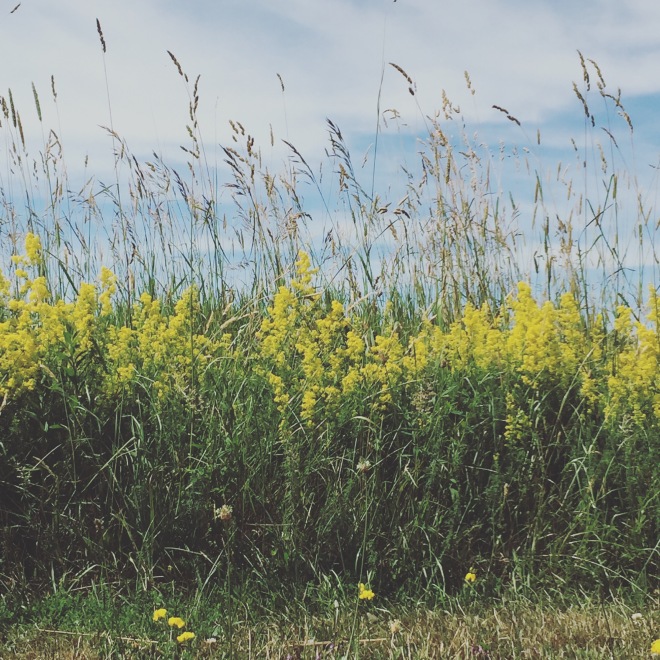 It was a gorgeous afternoon in one of my favorite spots in WNY.  After Nugget and I got a good stretch, we headed home to meet up with the rest of the family for a swim. 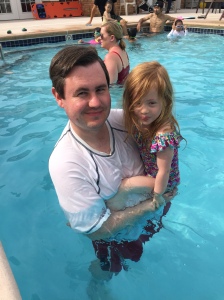 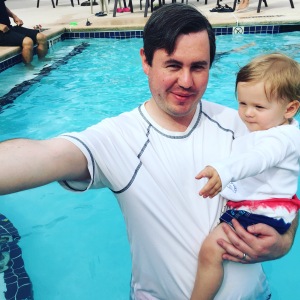 Such a fun weekend!  Anyone still with me?  Sorry to photo-dump; I just love looking back on these posts years down the road.  This one will definitely go down in the books as one of our best Independence Day weekends ever (even if it was sadly lacking in Bill Pullman and Will Smith).

Happy (belated) fourth of July, friends!  How did you celebrate?