Happy week-after-Halloween, my friends!  I’m still coming down from a fabulous October, and hoping the rest of the season is as much fun.  After three truncated fall seasons in New York, we are squeezing every bit of golden light out of our first fall back in the DC area.  But we’ve been so busy that I haven’t really been able to keep up here.  So instead of boring you all with fall fun recap posts into December, I’m just going to tell you about the last two weeks of October, and Halloween, right here.  Prepare for a massive photo-bomb post!

Apple picking is always on my fall agenda, but I never seem to be able to get the timing right.  I always think that it should be fine to go in October, and I’m always confronted with slim pickings (see what I did there?).  Aside from one year in Buffalo, when we actually made it on time, we’ve always been among the very last pickers to trickle into an orchard and this year was no exception.  I thought we should be able to push it later than in New York, given the long growing season here.  Evidently, I was wrong and will file that information away for next year.  But we still had fun, which is what counts! 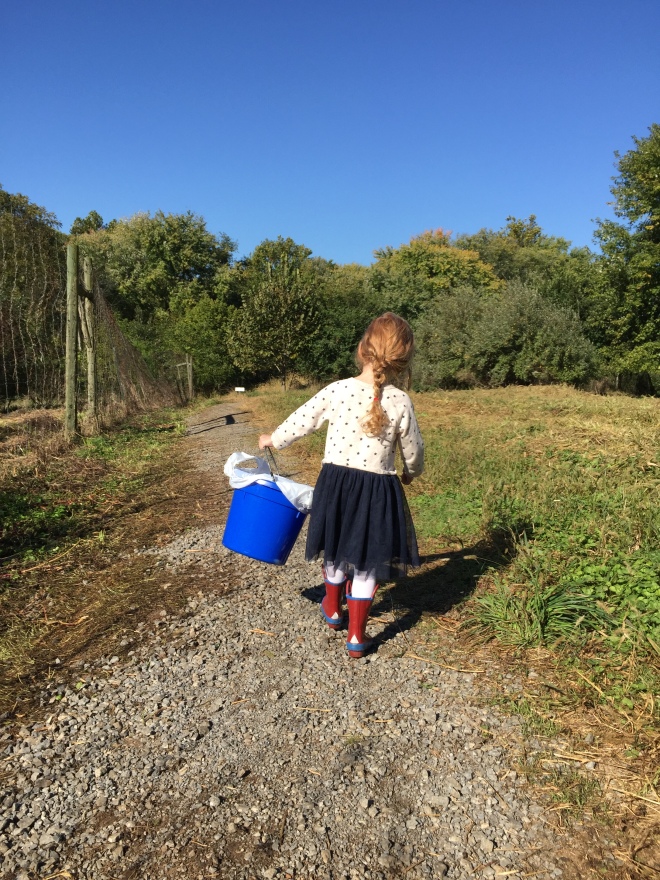 We arrived at Crooked Run Orchards, out in Loudoun County, in our rain boots and tulle dresses (okay, that was just Peanut) and ready to pick.  The friendly farm staff told us that the trees were mostly picked bare, but there were a few spots in the back corners of the orchard where we might expect to find some more fruit.  Not to be dissuaded, we headed out for a little hike to the promised fruit. 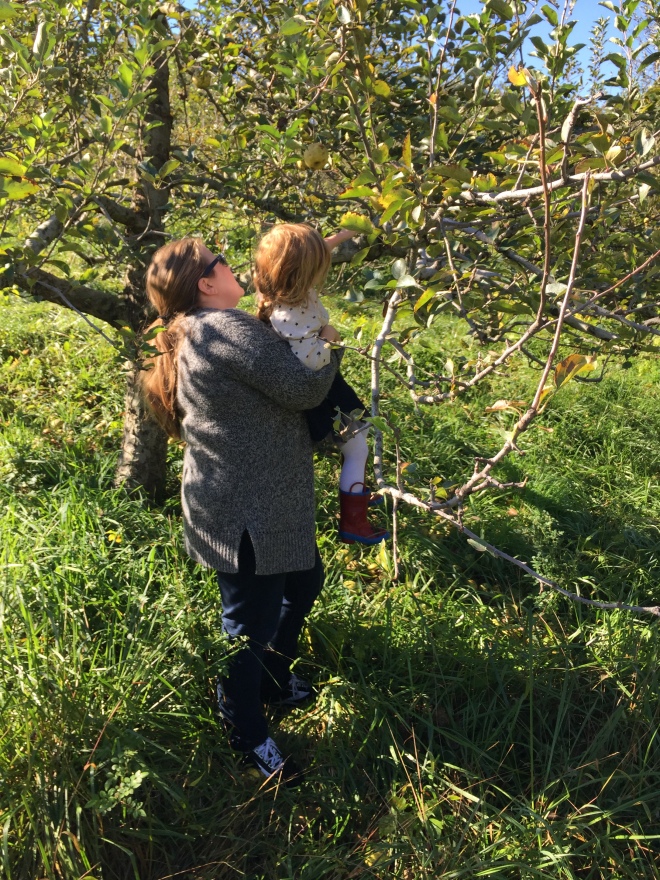 After fording a stream and hiking through the entire orchard, we found one lonely tree with decent-looking apples up at the top branches.  After an attempt at hoisting Peanut, I ended up climbing up myself to reach the apples.

Peanut waited below the tree with a bucket, held out her hands for the apples I passed down, and carefully placed them in the bucket.  When did she get so helpful?  Hold me. 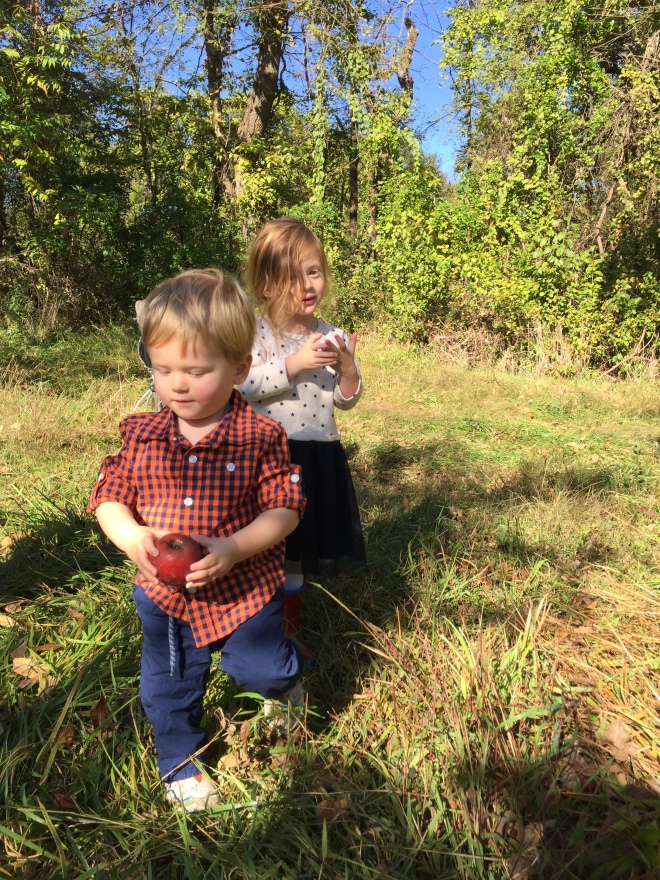 Eventually we let Nugget out of the backpack to run around…

And do a little picking of his own.

And eventually I was able to get what I wanted – other than a bucket full of apples, that is – a picture!  Someone was a little too excited.  Can you handle Nugget’s expression?  He’s like, OMG, tone it down, sis! 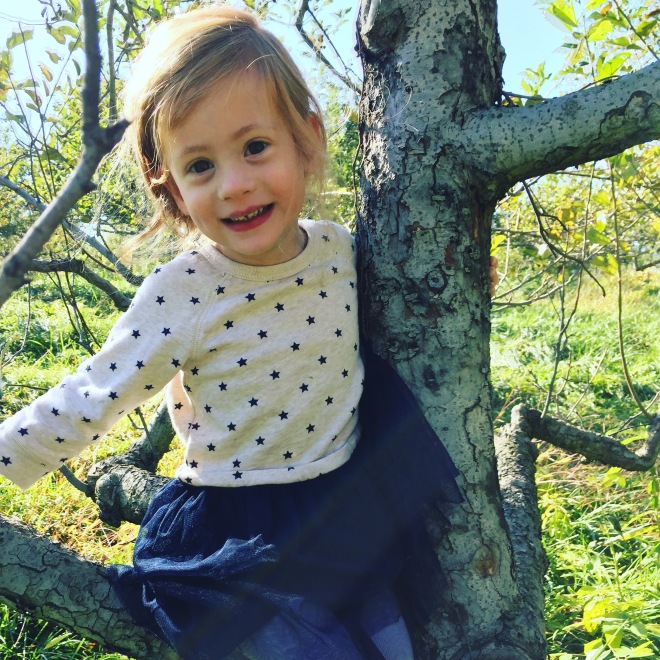 There was more tree-climbing after we were done picking.  Peanut declared that she is an apple.

Yay, apple picking!  I’m glad we made it out to the orchard before it was really, really too late.  We have a few apples left – Peanut has been eating them with her lunch every day, but they’re starting to look a bit long in the tooth.  I think an apple coffee cake is in order this weekend, to use up the rest.

Moving right along to pumpkin picking!  I harbored some far-fetched hopes of finding a farm that would do both apples and pumpkins so we could knock both out at once, but it was not to be this year.  So the following weekend, we were back in the car and headed to the country again, this time for the other required fall pick-your-own experience. 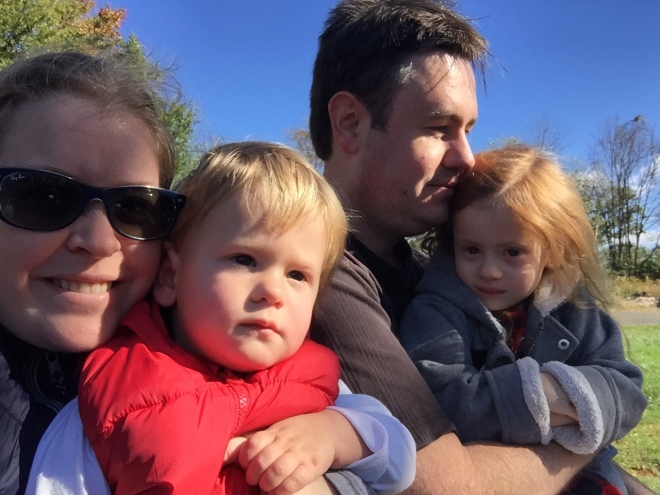 We had considered going pumpkin picking with Peanut’s class, but the farm they chose was far away and super expensive, and it was really windy outside.  So we opted for a smaller, closer, less expensive spot and were so happy we did.  Everyone on the wagon, it’s hayride time!

After a short spin around the farm grounds – looks like they do Christmas trees, too – we were deposited in a pumpkin patch with the option to choose one of the pumpkins there and take it back on the hayride, or buy a pumpkin from the field right next to the general store, by the car park.  We decided that we had enough of an armload for the hayride and didn’t need to haul pumpkins of both the gourd and human varieties back on the wagon, so we would get our pumpkins from the farm store.  But that didn’t mean we couldn’t take pictures in the pumpkin patch!

Caught them in a sweet moment.  Awwwww.

Got back to the farmstand and found wagons!  I decided to try again for good pictures, this time aided by wheels.  We convinced Nugget that the wagon was a truck, and we were in business.

Speaking of trucks, Nugget happened to spot one of our hayride companions getting his picture taken on an old tractor parked outside the farmstand.  Try as I might, I couldn’t drag him away from the tractor after that.  So this had to happen.

We headed home armed with three pumpkins – a big one for the parents, and little ones for each of the kids!  I haven’t dug into any of them yet (I know, I know) so pumpkin seed-roasting happens this weekend.  My favorite fall treat! 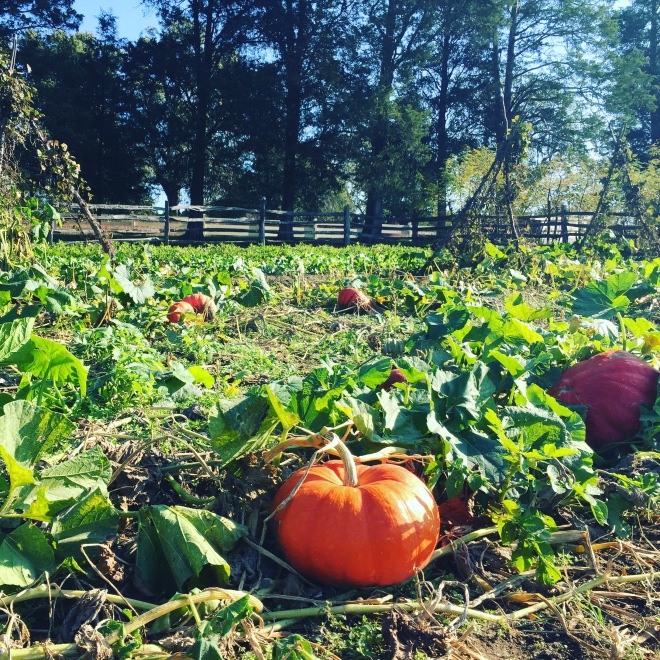 Another day, another pumpkin patch!  The day after our pumpkin-picking excursion, we all piled into the car again and headed down to Mount Vernon for the Fall Harvest Days Family Festival. 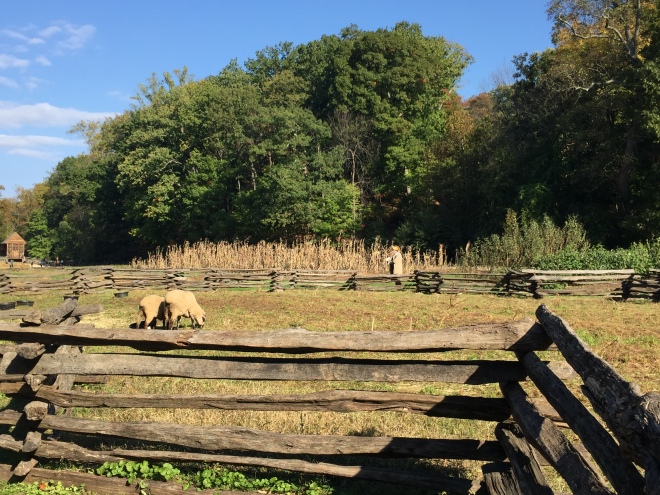 Most of the festivities were going on down on the pioneer farm site, so that’s where we headed.  Hi, sheep!

There were volunteers dressed in period costume all over the place, showing off their historically accurate skills.  Peanut enjoyed watching this puppet dance.

And Daddy got a cooking lesson.  This was some kind of sausage, apple and mustard dish.  I don’t know, you guys.  It sounded awfully gross.

The highlight for Mom: a stained glass window depicting the General and his Right-Hand Man!  Sadly, the festival was cut short for us by a massive Peanut tantrum.  It was not her day.  It happens.

Pumpkin Hunting at the Lee-Fendall House

On the Saturday before Halloween, we pulled the costumes out of their hiding spots for the first time this season!  I usually like to dress the kids in their costumes for their trip to the pumpkin patch, but as you can see from the pictures, that was not an option this year.  Can you imagine trying to take this mermaid and fire truck on a hayride and into a possibly muddy pumpkin patch?  How many languages can you say “no way, Jose!” in? 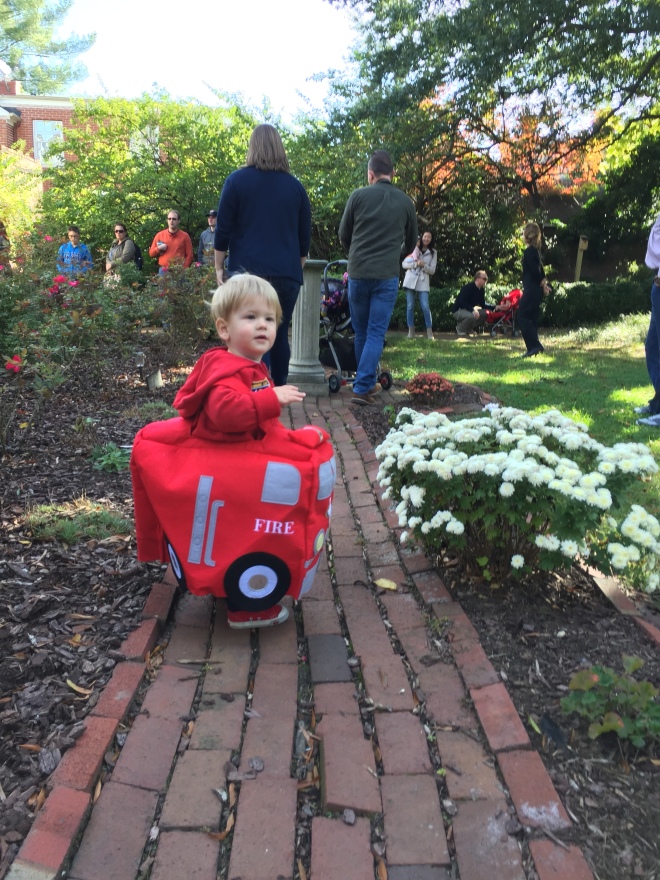 So the first appearance of the costumes was on Halloween weekend.  We had been discussing a playdate with one of Peanut’s school friends, and had hit on the Saturday before Halloween as a date that would work for both of our families, when I discovered a children’s party and pumpkin hunt taking place at one of the historic mansions just a few blocks from our house.  I texted Peanut’s friend’s mom, and they were into the idea.  A pumpkin-huntin’ it was!

The mansion went all out!  The employees were dressed to the nines in their Halloween best, and they had cookies, juice and games for the kiddos.  Including bowling for candy corns!  Nugget only made off with a few of the pins before the rest of the kids could play.  He really is a menace.  But he’s my menace!

We waited patiently all crowded on the patio until the kids got the green light, and then it was a pumpkin-grabbing free-for-all on the grass! 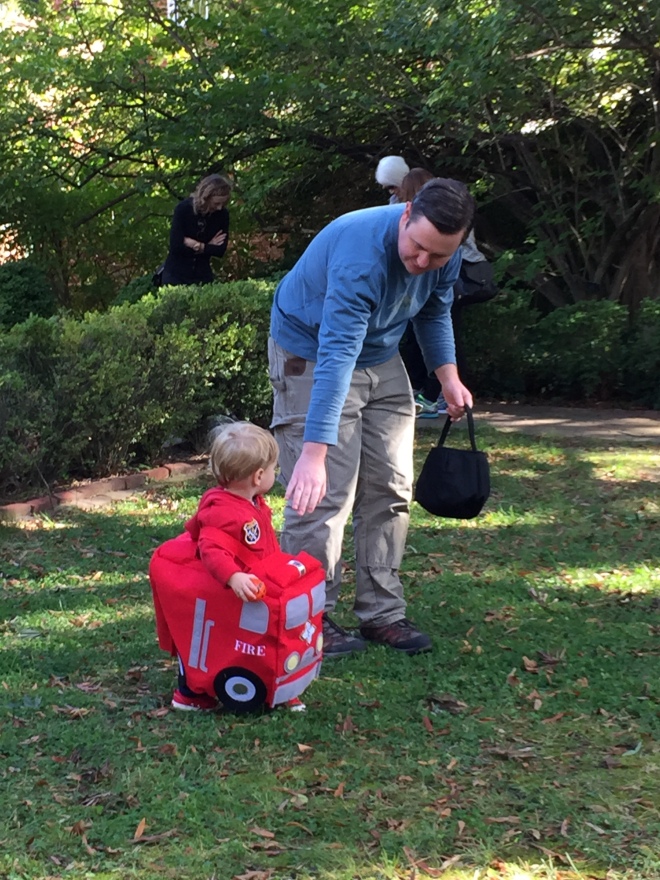 Nugget found the prize pumpkin!  His prize was a stuffed bat and a bag of choking hazards that I promptly threw away.  (He got to keep the bat, so don’t worry.)

After the pumpkin hunt, there was an excessively adorable costume parade.  Peanut and her pal marched up near the head of the line, while the little fire truck chugged along behind.

And then went back to bowling. 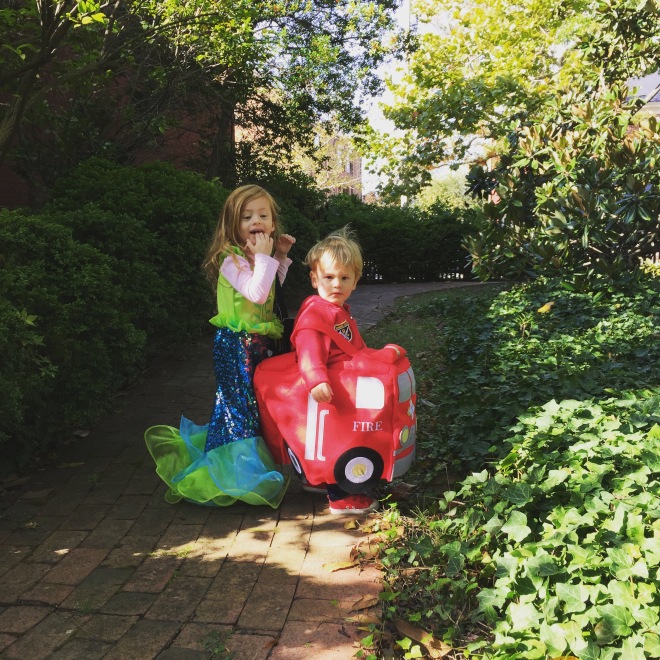 It was such a fun morning!  We were so glad that we were able to get there with Peanut’s little friend.  All of the kids had a fantastic time.  We will definitely be keeping this event on our Halloween agenda for future years!

Of course, we had to get in some crafts, too.  Peanut asked if she could decorate her room for Halloween, so Steve bought her a kit to make a black cat garland, and on Friday night we had a mother-daughter crafting party! 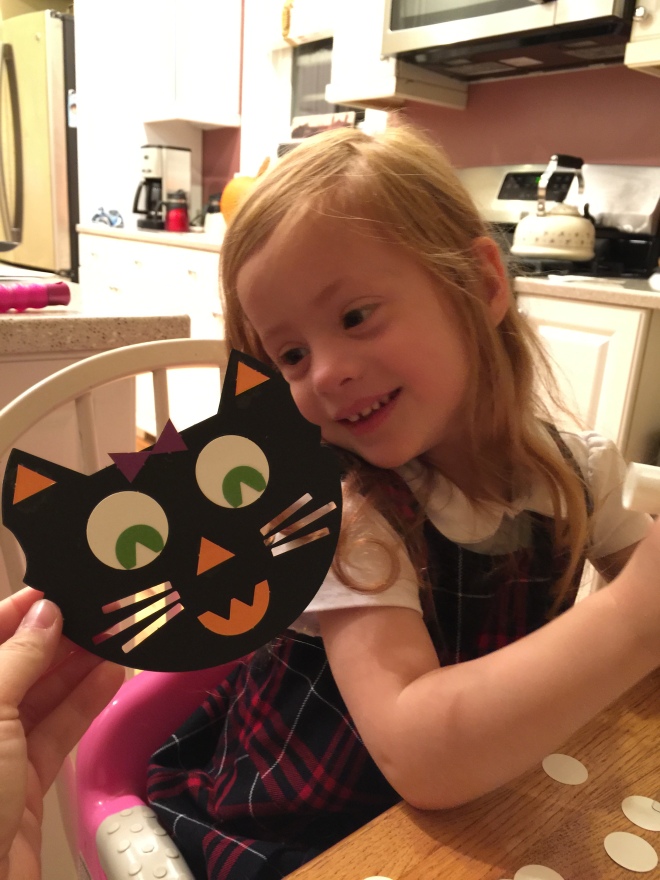 It’s possible I may have had a little too much fun.  Peanut liked my kitty faces, though.

I think this black cat is bringing me good luck! 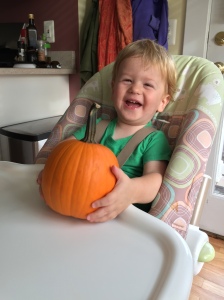 On Sunday morning, we pulled out Part II of our Halloween crafting.  For the past few years, instead of digging out either sharp implements or messy paints, I’ve pushed the easy button and let the kids decorate the pumpkins with spooky stickers.  Peanut loves festooning her pumpkin with stickers (she’s a big sticker fan in general) and Nugget didn’t really know what was going on, but he was EXCITED.

He did eventually do a few stickers.  What a big guy! 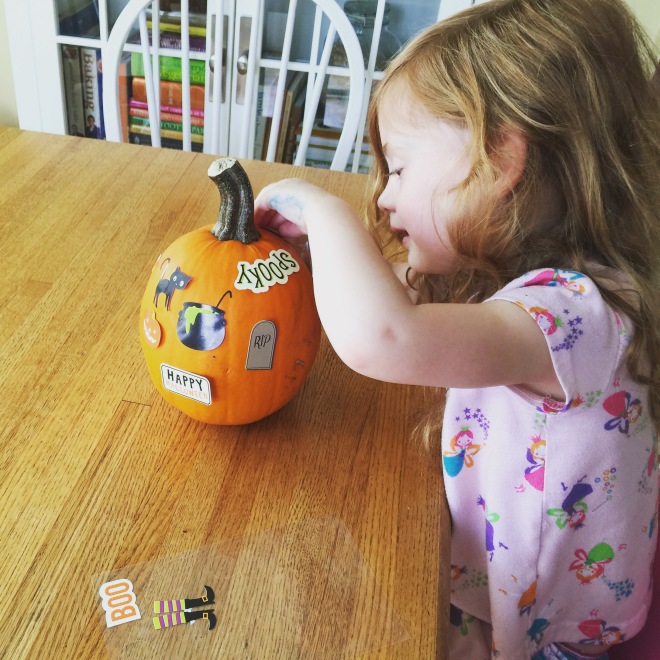 Peanut, of course, was all over it.  And Mom loved the fact that nobody got covered in finger paint or lost an eye.  Wins all around!

At last, at last, we come to the day itself!  Little folk were psyched for the main event! 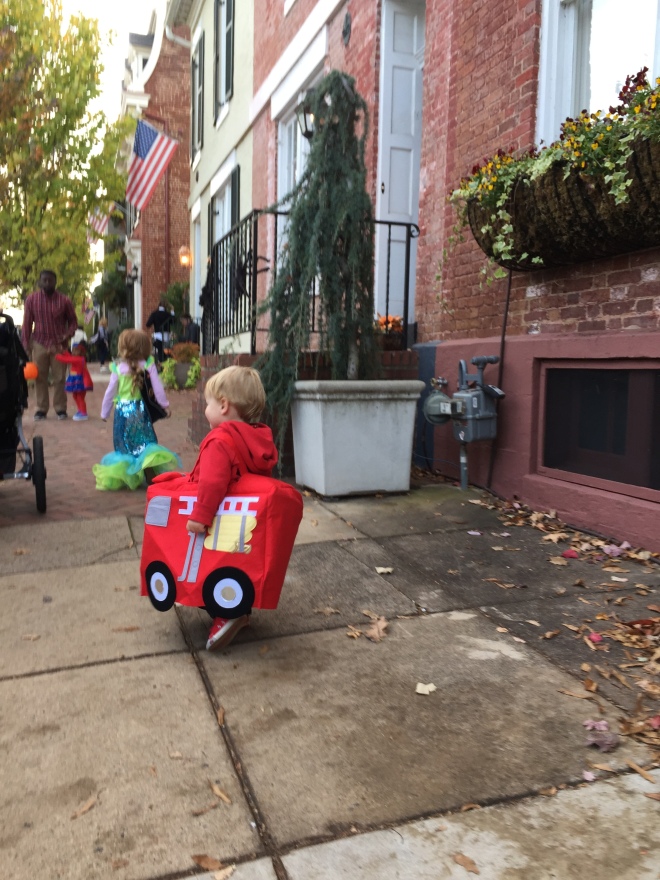 One of our school friends had tipped us off that South Lee Street, one of the side streets in Old Town, closes to traffic and basically becomes a giant block party starting at 5:00 on Halloween.  So clearly, that’s where we went.  Have to be in the mix, right? 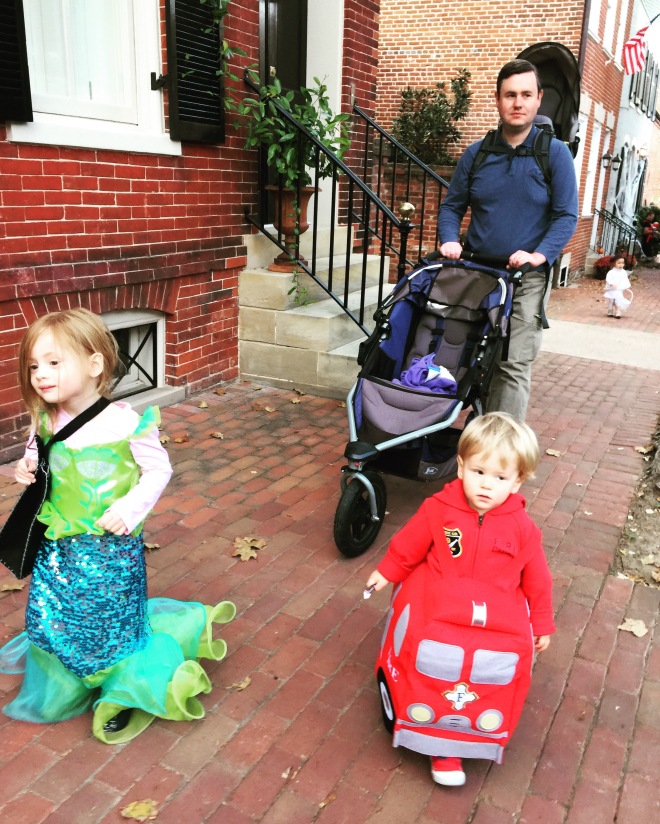 Peanut and Nugget were all business.  They put their game faces on and it was time.

Mermaid showed Fire Truck the ropes.  Both kids got lots of compliments on their costumes.  Lots of neighbors shouted out that Peanut was a beautiful mermaid, but my favorite was the woman who saw Nugget and called, “The Fire Department’s here!”  Ha! 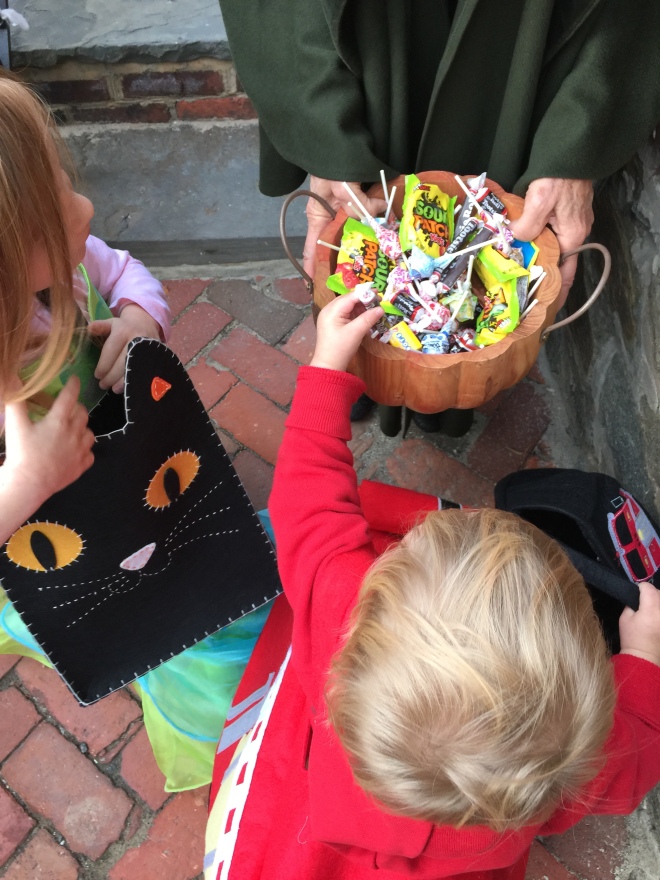 Nugget surprised me by doing really well with taking one piece of candy and putting it in his bag.  He also said “Trick or Treat” a few times (although it came out “Twee Twee!”) and told most of the neighbors “thank you” when I prompted him.  Peanut was an old pro at saying “Trick or Treat,” and “Thank you and Happy Halloween!” at each house.  So proud! 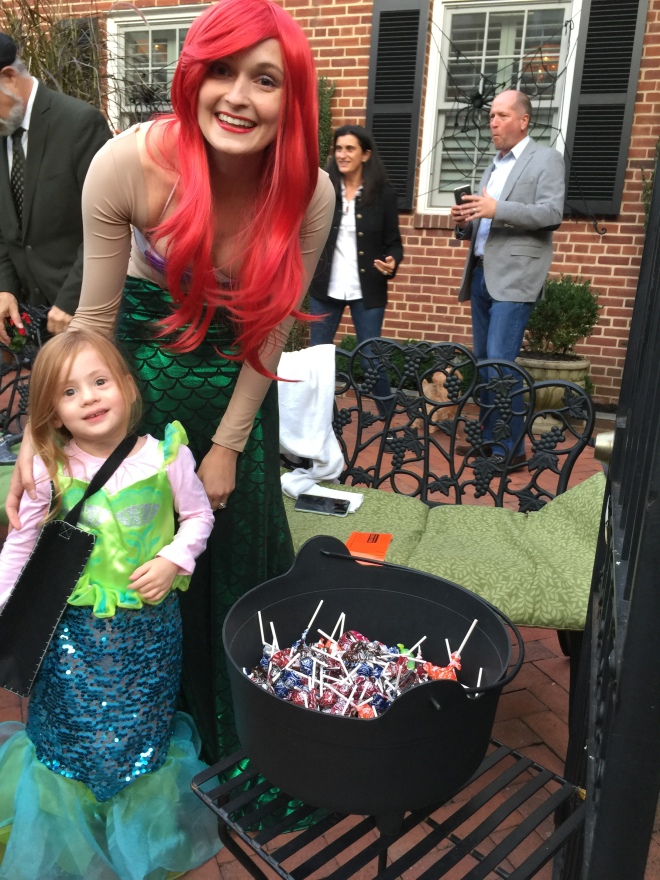 And then came the highlight of Halloween.  Ariel!  She was handing out candy at the last house we visited and Peanut was totally starstruck.

Happy Halloween, indeed!  Props to you if you made it this far, and I hope you all had as fabulous a Halloween season as we have!  And now… on to Thanksgiving!

Happy Halloween, my friends!  Did you go trick or treating?