Switching up the order of posts just a bit – I know that on Monday I told you that I’d have my May reading round-up for you today, and Memorial Day recap on Friday, but there’s one more day in May and I think I’m going to finish a book this evening.  So we’ll do the books on Friday, and instead talk long weekend fun today.  Prepare for a photo bomb!

We had a really nice one!  Unlike last year, we didn’t travel anywhere.  Instead, we opted to stick close to home and find ourselves some local fun.  Saturday morning found us heading out bright and early for Exploration Days, a toddler event at a lavender farm out in Loudoun County.

Exploration Days is an event led by April Schmidt of Nurturing Growth, a family health and wellness organization.  The event welcomed kids ages two to five (with their parents in tow!) to explore Seven Oaks Lavender Farm and learn about some of the plants and insects the call the farm home.

April handed out magnifying glasses to each of the kids and began the tour with the herb garden (which smelled incredible).

Nugget didn’t totally get the magnifying glass concept, but Peanut was way into it.  She spent several minutes looking through her “gold” magnifying class at a swallowtail caterpillar. 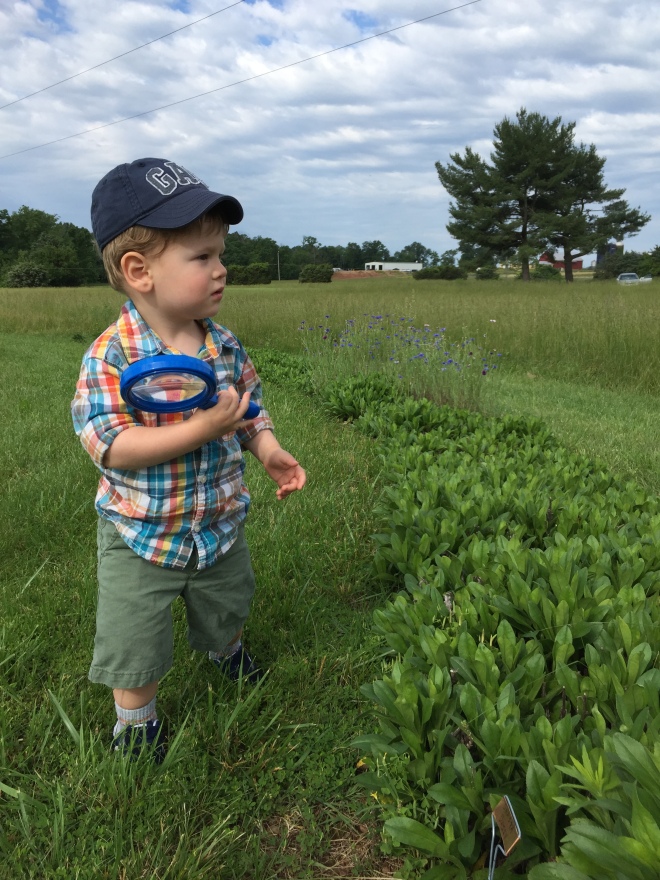 April also encouraged the kids to smell some of the herbs – including lemon balm and mint – growing in the raised beds.  Nugget enjoys smelling things, so he liked that part.  Then she led the group (it was just us and one other little girl with her mom) over to a blanket and taught everyone a song about the five senses.

Next, we headed out into the farm, while April continued to point out more interesting plants and insects!  Most of the lavender wasn’t in bloom yet – just one varietal was starting to purple – but the farm is opening officially for the season this weekend, so I think we may give it a week and then head back out there to do some lavender picking. 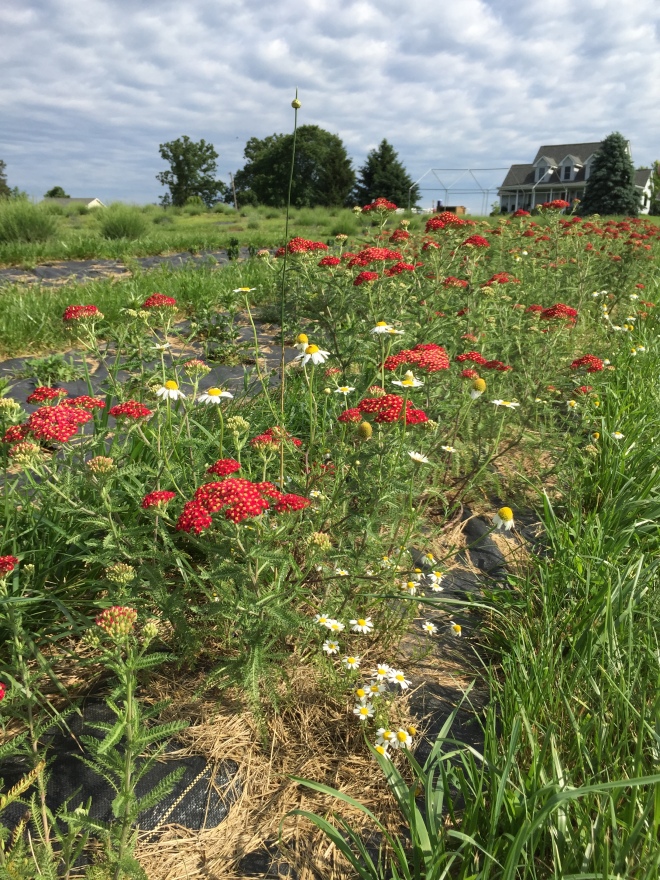 Even without lavender, the kids enjoyed exploring and running around the fields.  And there were other flowers in bloom!  How gorgeous are these red flowers?  #frontyardgoals.

Next, we sat down at long tables and the kids got the chance to decorate popsicle sticks to use as markers for their own little seeds, which they got to pot and take home.  Nugget had fun decorating the marker (while I hovered over him and repeatedly shouted “Not on the table!”) but he was sort of done with it once it came time to actually plant the seeds.

He dug in the potting mix while Steve helped Peanut fill up her little purple pot, and then April ended up planting a bean for him.

April even kindly added a trip to see the “tractor” (it was a lawn mower, I think?) on to the program, since Nugget talked about tractors the entire time.  He liked the tractor.  He liked the sand box even more, with its fleet of trucks.

They even had activities for Steve!  While Nugget dug in the sand box and Peanut played in the play house with the other little girl, Dad – okay, and Mom – fed the bunnies in the bunny pen. 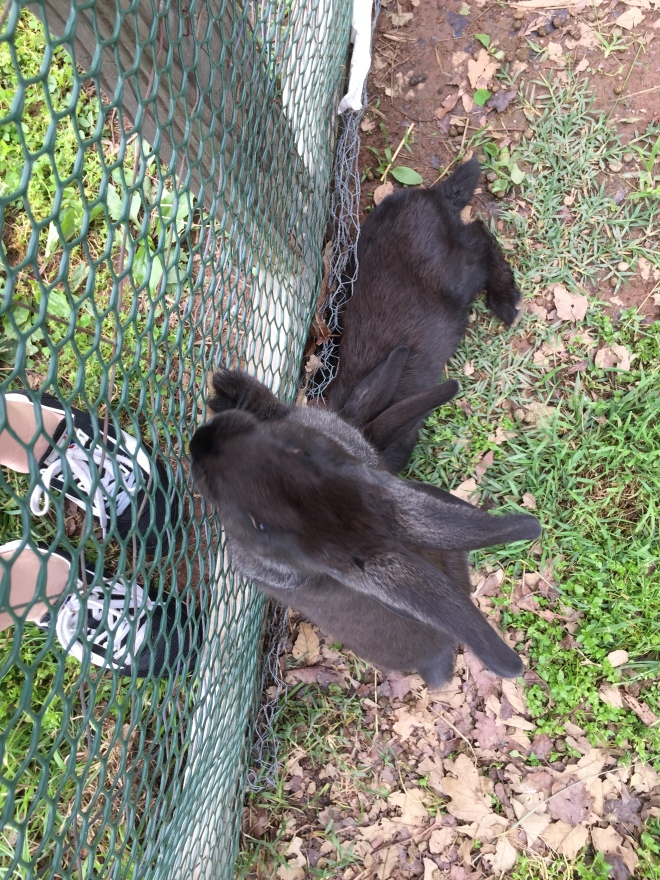 GAHHHHHH THEY WERE SO CUTE. 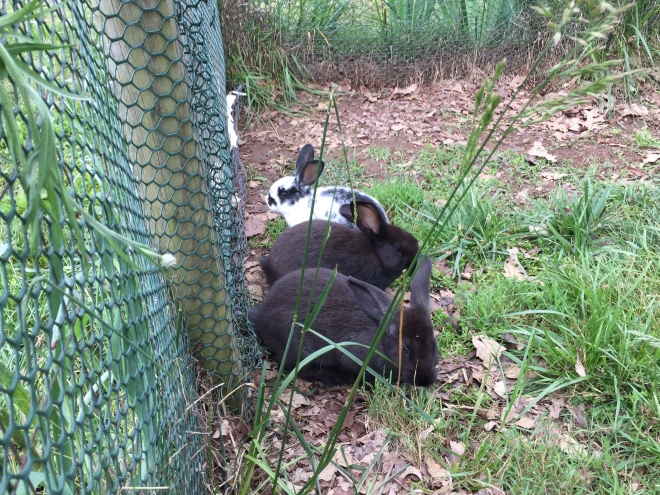 (Don’t worry about these bunnies, by the way.  They’re just there for entertainment purposes, and at the end of the season they’ll go home with various farm visitors as pets.  Not food.) 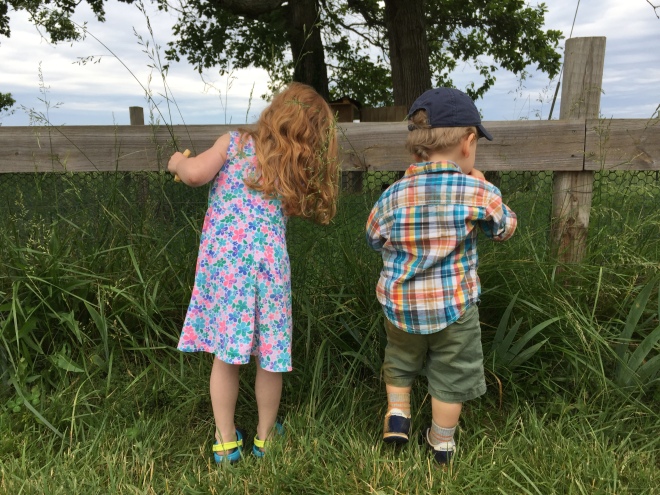 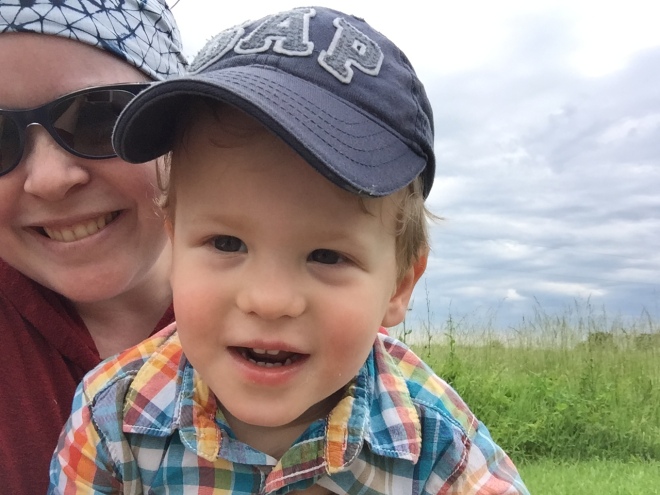 Such a fun morning on the farm!  Thanks to April and Nurturing Growth for the event – we had a great time.  It’s actually rare to see an event that not only welcomes toddlers and preschoolers, but is actually designed for them.  April was fun and engaging with the little ones, didn’t bat an eye when someone (Nugget!) wandered off in the middle of her song, and knew when to cut it off and move on to the next activity before attention spans ran out.  Clearly, she’s got lots of experience with this demographic!  As parents who like to get our kids out and teach them about the world, but find it hard to find weekend events for little ones as young as ours are, we really appreciated April and everything that she arranged for the kids through Exploration Days.

Moving right along!  No weekend is complete without a trip to our favorite playground.  Sunday morning found us on the swings. 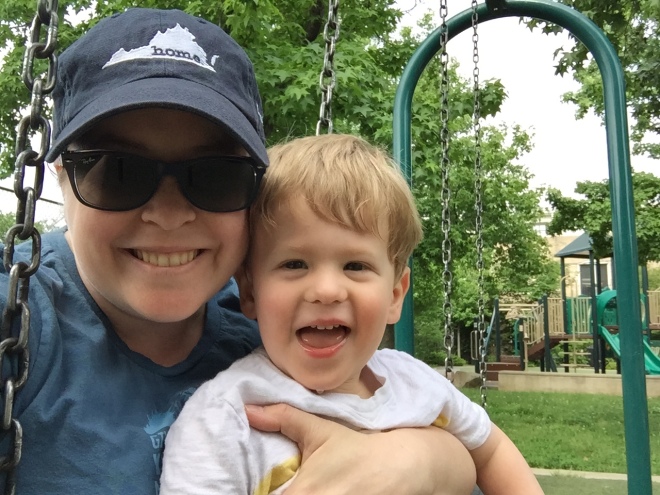 And the… steering wheel.

Then Daddy and Peanut joined us, and we made our way down to the river to check out Jones Point, a small NPS-managed park in Old Town (nestled right under the I-395 overpass). 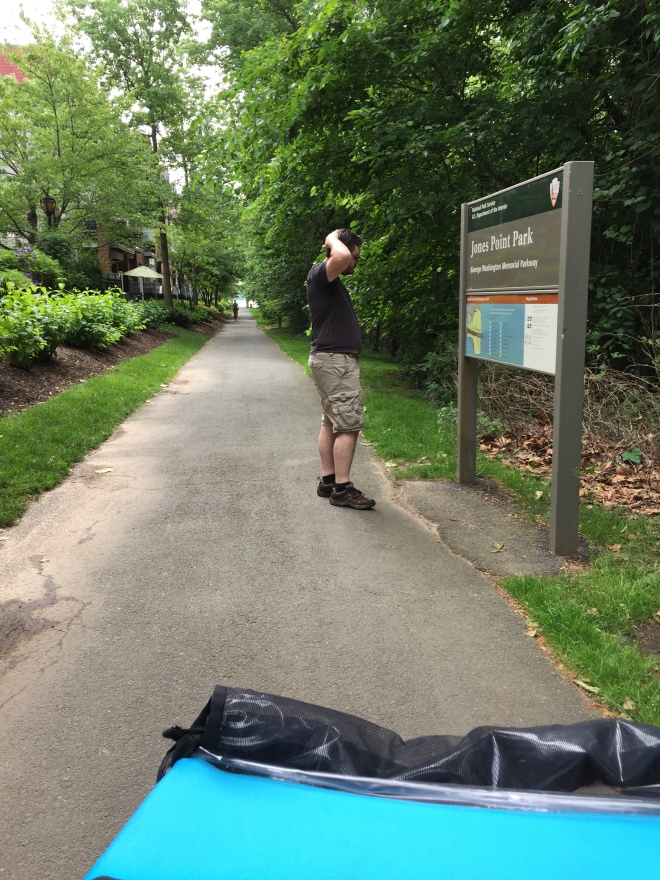 When we moved away, Jones Point was just starting to come back into popularity.  The government did a big refurbishing effort and it’s now beautiful, but even though we live so close, it hadn’t occurred to us to check it out until one of the other dads at Peanut’s school mentioned to Steve that their family had been hanging out at Jones Point a lot recently.

The park occupies a green space down by the river, and there is also a big open area under the 395 overpasses.  It’s quieter than you would expect, and actually really cool to see the big bridges from underneath.  I was sort of skeptical about whether it would seem nice or not, but it did.

Although the overpass area was cool (and would be a great – safe – place to teach a kid to ride a bike, as several families were doing) we didn’t linger there.  Instead, we checked out the map and made our way to our first destination – the playground.  (Yep, second playground of the day.)

Peanut enjoyed it – she’s starting to get really good at climbing, thanks to the playground at school. Not that long ago, Steve or I would have been hovering underneath her, ready to catch her if she got tired and slipped off.  Not anymore!  She totally had it covered.  But this particular playground didn’t really have any equipment that was appropriate for Nugget, or that he could use.  He wandered around looking for something to do, made a run for it a couple of times, and then we left to look for something the whole family could enjoy together.

Like the Jones Point lighthouse.  When Steve suggested visiting Jones Point, I said, “That’s where the lighthouse is, right?”  He didn’t know what I was talking about, but – I was right!

The historic lighthouse is down by the river – and I think it would be really cool to see it from the water, and all lit up.  But seeing it from land, by day, was nice too.

We wandered down to get a closer look and check out the views of National Harbor. 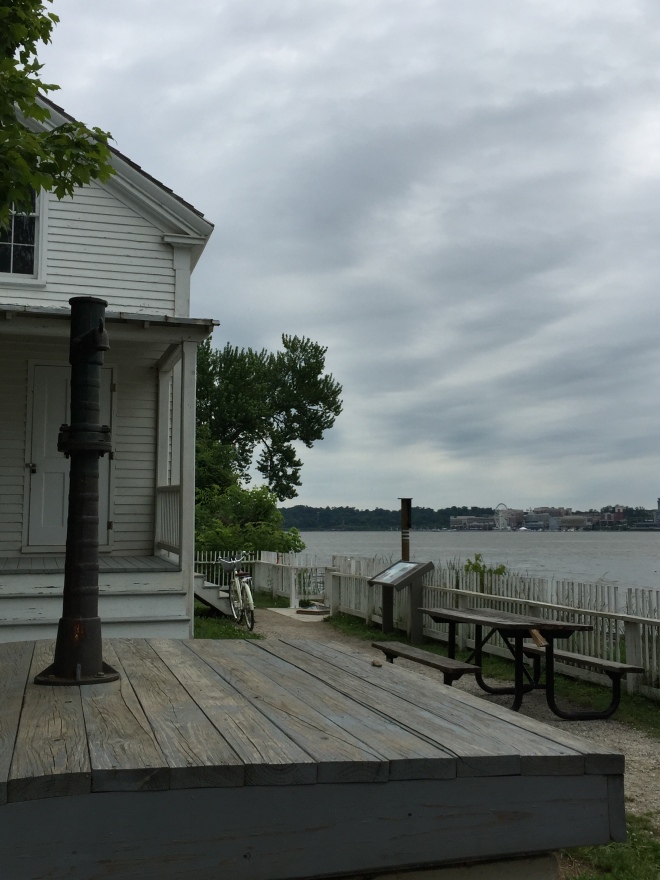 So pretty!  From there, we headed off on a very short hike through the wooded area of Jones Point, and checked out the historic D.C., Maryland and Virginia boundary markers.  Jones Point was such a pretty park, with lots of fun different areas to enjoy.  I predict we’ll be spending a fair amount of time there this summer.

Not many pictures from Memorial Day itself, but – look who we spent it with!  Zan and Paul were in town.  Yay!  Zan joined us late morning, and Paul for lunch.  While we waited for Paul, the kids dragged Zan to their favorite playground and insisted she accompany them onto all the equipment.  She was a good sport!  From there we headed off to check out a Mexican restaurant for lunch, which was good, but not anything really special.  The company was really special, though!  We walked home, put the kids down for nap, and then spent a couple more hours chatting with Zan and Paul out on our back patio while the babies were asleep.  It was such a fun lunch/afternoon with friends that we don’t see nearly enough!

Zan and Paul left to go to a cookout with other friends just as our kids were waking up, so we headed out for more fun, since the weather was so gorgeous.  We tried the playground again, but there was a toy-snatching incident (Nugget’s favorite school bus was grabbed by another kid and I had to chase the kid all over the playground to get it back – his adult didn’t lift a finger to solve the problem, which annoyed me) so I took Nugget home early.  We met up with Dad and Peanut and headed down to the waterfront for some art appreciation (dinosaur and kitty paintings!) and dinner.

All in all, a fun and relaxing Memorial Day weekend with a good mix of kid activities and grown-up friend time.  Can’t beat that!

How was your Memorial Day weekend?