As my friends no doubt know, I am an avid kayaker.  I’ve loved the sport since I got my first kayak, when I was fifteen years old, and Steve is into it too.  Together we’ve kayaked down the Potomac past the monuments, through Blackwater National Wildlife Refuge, and around the Adirondack lake where my parents have their camp.  But in recent years, it’s been harder to get out, because – well, for obvious reasons.  And if you’ve been reading here for awhile, you’ve certainly seen me write wistfully of my kayak and of happy hours spent gliding along the water, and days I thought were long gone in light of my two little non-swimming munchkins.

That dim outlook on kayaking, I am glad to report, no longer holds true!  Over the Fourth of July weekend, I took both kids out for a spin around the Sacandaga, and they did so well in the kayak that I returned to D.C. determined to seek out the best family-friendly paddling options around the DMV (District, Maryland, Virginia – for the uninitiated).  A quick spin of the Google machine led me to Kid Friendly D.C. and their excellent paddling resources.  On their advice, one sunny Saturday, we headed into D.C. to check out Fletcher’s Cove.

Fletcher’s Cove is part of the C&O Canal National Historical Park, which is managed by the National Park Service.  Before reading the Kid Friendly D.C. posts, I’d never heard of it – and I was really missing out.  You can rent canoes, kayaks and rowboats, and the park is conveniently located on the C&O Canal towpath and near bike trails.

After some confusion at the entrance, we found parking and headed across a cute little bridge into the park.

The process of renting a kayak was as simple as could be.  We filled out a short waiver form, let the guys working the rental kiosk know we wanted single kayaks for about an hour, grabbed our paddles and life jackets, and we were on our way. 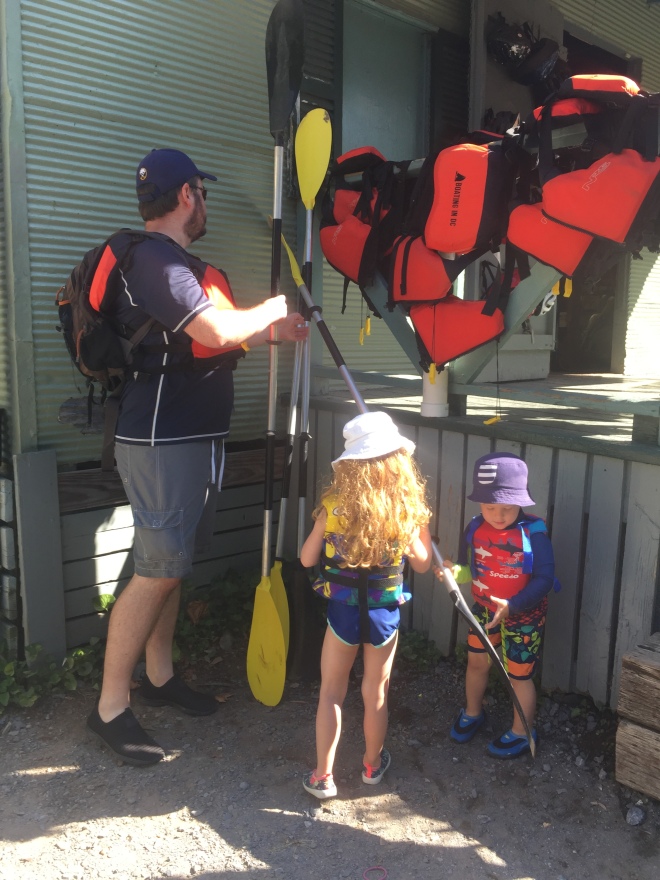 I was glad they allowed us to rent single kayaks.  Both of the kids were duffing, which is paddling lingo for riding along without helping (but hopefully also without hindering).  Most duffing families were renting double kayaks, and seating the paddler in the back and the duffer in the front.  But since our munchkins can’t swim, we wanted them within arms reach – in our laps, really.  The staff at Fletcher’s Cove totally got it, and since the kids are so tiny, they let us forego the double kayaks.  (Although we may change up the arrangement on our next excursion – read on.)

Down to the dock, and ready to go! 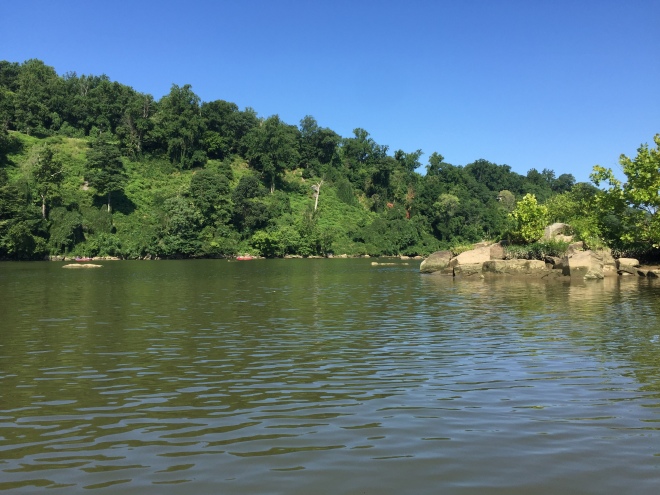 Fletcher’s was perfect for paddling with young kids.  Just upriver from Georgetown, it’s in a quiet and sheltered spot, where the current isn’t too strong and the water is peaceful.  Our first paddling excursion was on a very warm and not-too-breezy day, so we saw a lot of like-minded folks out on the river.  Plenty of families were out enjoying the morning together in kayaks, rowboats and canoes, and we also spotted fishermen in boats and on shore, and even a few hikers on trails just next to the river. 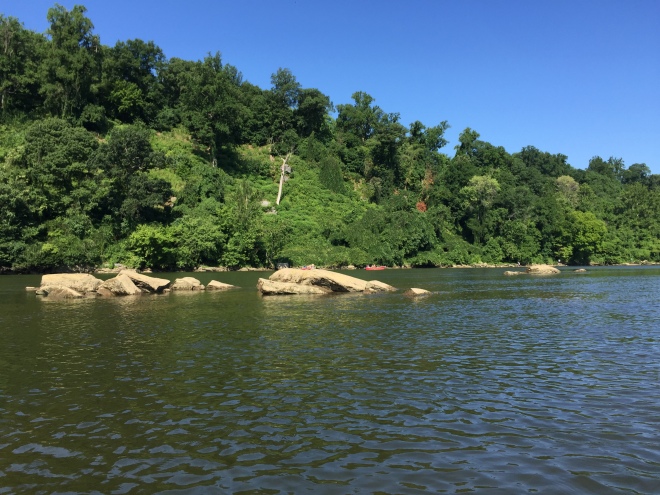 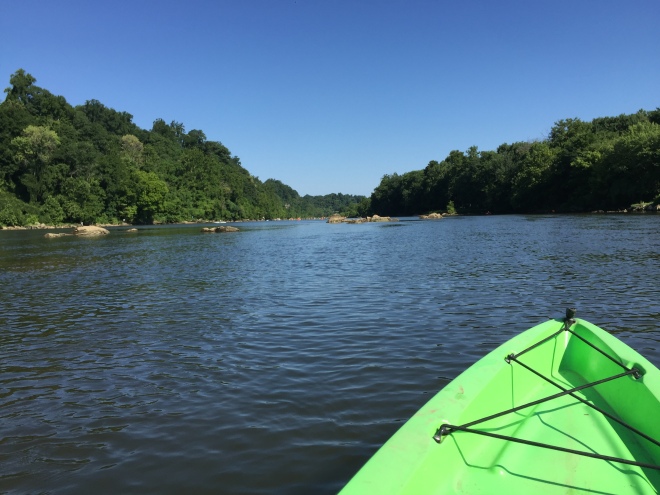 Such a gorgeous day.

I loved looking around at the beautiful riverbanks, but of course the best view is always this one:

Peanut rode along with Steve and I’d say she enjoyed the outing, too.  She was a bit apprehensive about the plan until she learned that she wouldn’t have to paddle – ha!  She spent the entire paddle kicked back with her sunhat and shades on, reclining on her Daddy.  Bit of a diva? 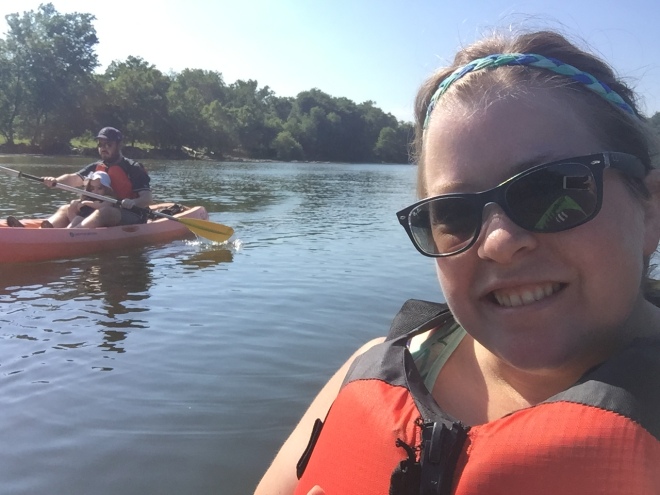 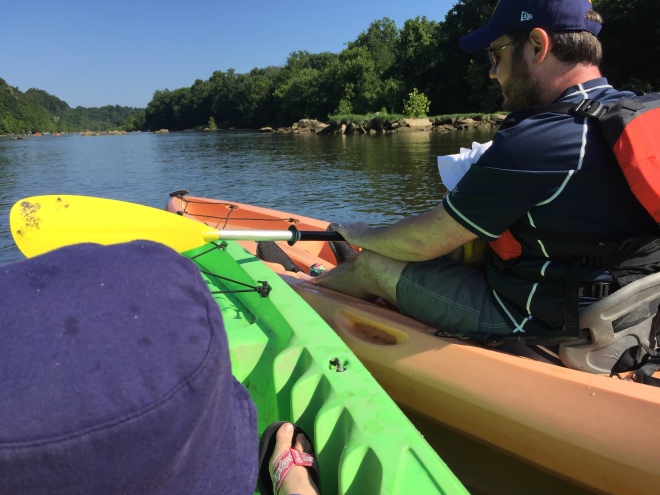 Over in my boat, I was having a different experience from Steve.  Far from reclining and soaking up the summer sun, my duffer was eager to help – to the point of snatching my paddle and demanding his turn to “drive.” 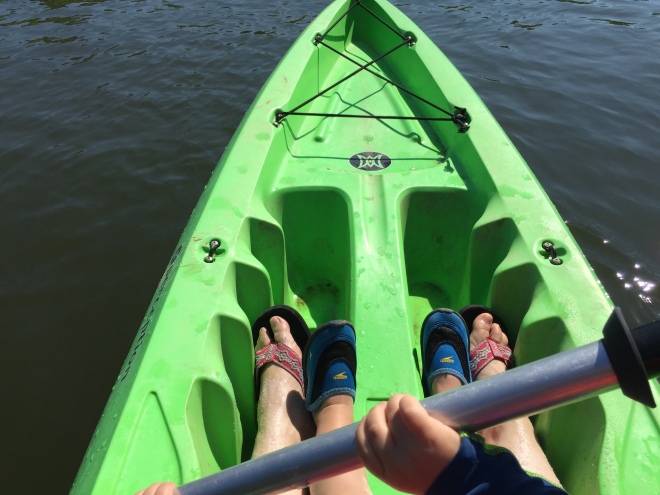 We spent a lot of time going in circles.

While Nugget and I lagged behind, zig-zagging along and arguing over the paddle, Steve and Peanut were zipping on ahead.  Eventually Nugget and I caught up. 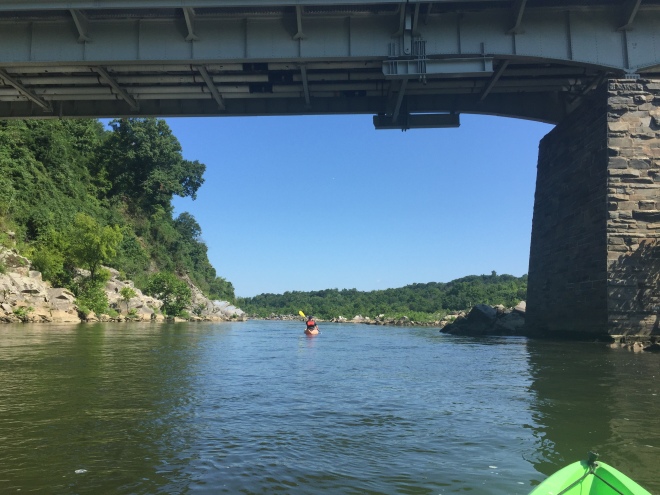 We made it all the way to the Chain Bridge, which is the boundary beyond which the Fletcher’s kayaks are not permitted to go, then turned back and headed for the dock to turn our boats in.

Saw some gorgeous rock formations on the way back!

Waved goodbye to the piles of canoes on our way out…

I was so glad that kayaking worked out!  I have missed being out on the water more than I can tell you – it felt wonderful to not only be back in a kayak, but to be sharing one of my favorite water sports with my three favorites.  We were slow, and we didn’t go very far, but I think Steve and I were grinning the entire time; we were just so happy to be out there.

So happy, indeed, that we were back at Fletcher’s just a couple of weeks later to go out again.  We would have loved to kayak every weekend, but weather and other plans intervened – but we were back at the dock as soon as the circumstances allowed us to be.

(Worth noting – Fletcher’s, and in fact all of the D.C. boathouses, have life jackets available from infants on up.  We brought our own, but borrowing is certainly an option if your kiddos don’t have PFDs.) 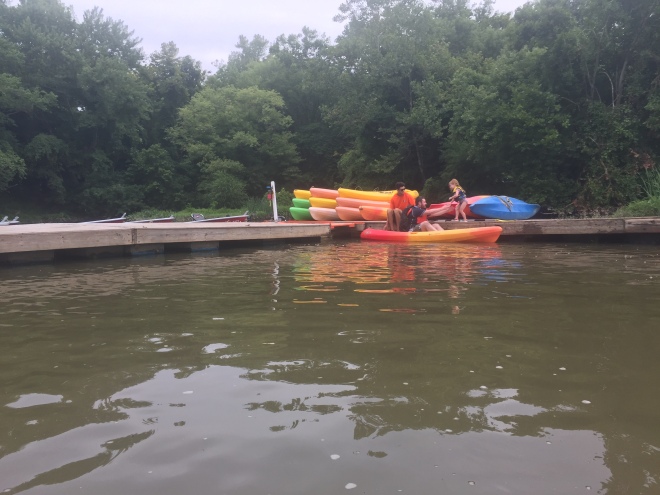 Everybody into the boats!  Peanut did really well with standing on the dock and waiting patiently until it was time for her to clamber into Steve’s lap. 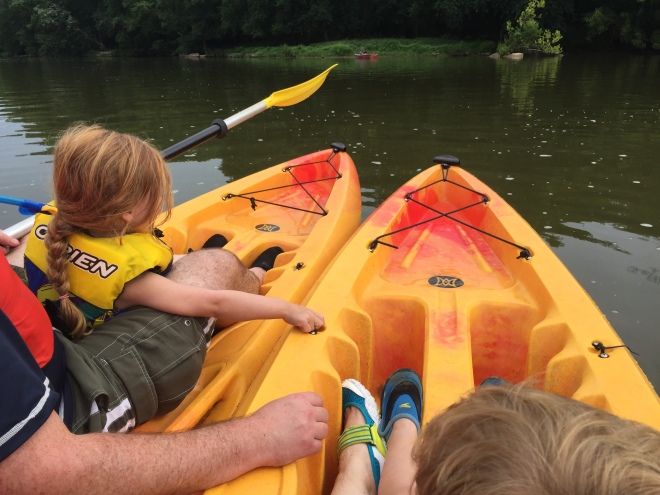 We both got flame-colored kayaks the second time!  So pretty.  And nice, because it was a grey day and the bright kayaks were a beautiful counterpoint to the muted river and sky colors all around us.

Same experience the second time around…

Steve’s duffer enjoyed reclining gracefully against his life jacket while he paddled unencumbered.  (He did say that she put his leg to sleep, though.  So we may try out a double kayak for Daddy Team next time.) 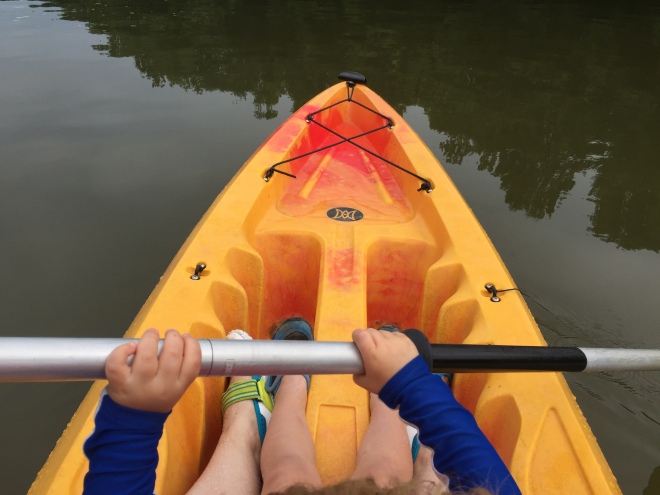 While mine insisted on “helping” the entire time.

One last treat as we turned into the cove – a couple of ducks!  Nugget spotted them first and was so excited I thought he might try to join them in the water.

Thanks for a perfect couple of mornings on the water, Fletcher’s!  We’re going to try to come back a few more times before the kayak rental shop closes up for the season.  It’s such a delight to know that we can enjoy one of our favorite activities again, with our two little duffers along for the ride.

Are you a kayaker?