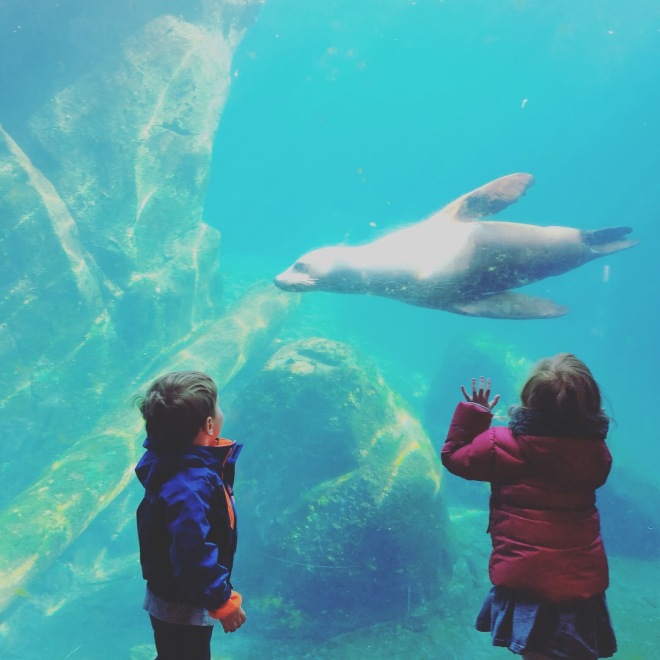 Happy, happy, happiest of birthdays to my big three-year-old guy!  I still can’t believe that Nugget has been with us for three whole years.  I know I’m a broken record on this point, but it really does seem like just yesterday that he was born.  This weekend was, of course, all about celebrating him.  We let him choose the activities all weekend long.  On Saturday, he wanted to hike, and Steve suggested Piscataway Park, since it’s fairly small, has nice views of the Potomac, and there are farm animals.  He had a ball, of course.  There was a brief lightsaber duel using sticks, but aside from that it was a very peaceful morning.  (I worked during naptime, but you have all probably guessed that already.)  His request for the evening was pizza delivery and a movie on the couch.  Somehow – I wasn’t present when the movie was selected – I walked into the room just in time to hear Robert Muldoon shouting “SHOOOOOOT HER!”  Jurassic Park, really?!  Peanut, who is surprisingly bloodthirsty, loved it, but Nugget was over it by the time the T-Rex started terrorizing Lex and Tim in the Jeep.  Ummmm.  Yeah.  Saw that coming.  We switched to Winnie-the-Pooh and he was happier.  On Sunday, his actual birthday, he asked to go to the zoo, so we all piled into the car and headed off for more animal fun.  As Steve said, the kids’ zoo-meters were on “full” after our morning – it seemed like we saw absolutely everything there was to see.  Lions, tiger, cheetahs, zebra, bison, gorillas, orangutans, pandas, elephants, sea lions, sloth bears, plus visits to Amazonia and the Reptile House (which always makes me think of Harry Potter).  We ended the weekend with a walk to the playground, a birthday dinner out in one of our favorite neighborhood restaurants, and takeaway gelato – all Nugget’s requests.  All in all, a pretty awesome weekend.  Nugget, in case you didn’t already know, is a really fun guy.

Reading.  Pretty busy reading week, I had.  I finished up Winter in Thrush Green early in the week – such a lovely, peaceful book.  I can’t get enough of Miss Read.  And I’m going to need her again soon because my next two reads were not at all peaceful.  In the latter half of the week, I read This Will Be My Undoing, which was a fascinating and illuminating essay collection about “living at the intersection of black, female, and feminist in (white) America” – as part of my ongoing mission to learn to be a good ally.  Finished that up on Friday and turned to – apparently I’m feeling extra political this week – Fire and Fury.  I know, I know, but everyone in D.C. is talking about it and I wanted to be part of the conversation.  I reserved it from the library and have been waiting more or less patiently for months.  And I know parts of it have been questioned or discredited, but if even a third of it is true – dayum.

Watching.  Well, there was the aforementioned Jurassic Park.  And on Friday night, Steve and I blazed through the final three episodes of the first season of The Good Place – such fun.  But the best thing I watched this week had to have been the delight and joy on Nugget’s face as he ripped open his birthday presents, explored the trail on his birthday hike, and rocketed around the zoo.  I think he had a great weekend, and I loved seeing him enjoy himself.  I’m so, so very glad that I have him.

Listening.  Honestly, y’all, I can’t remember what I listened to last week.  I know I listened to a few podcasts, but nothing is really jumping out as a highlight.  I’m thinking of switching back to Audible.  I have an audiobook of my favorite of the Anne series – Anne of the Island – and it’s calling my name.

Moving.  The most moving this week, like last week, was by air travel.  On Tuesday morning (6:30, bright and early!) I was taking off from D.C. on my way up to Boston for two days of meetings and hearings.  It was an exhausting trip, but there was one very bright spot – see below.  Other than that, I’ve already told you about my movement over the weekend – lots of kiddo-chasing on a hike and around the zoo.  (The National Zoo is built into a hill, so it’s actually a decent workout, walking around there.)

Blogging.  Spring list coming to you on Wednesday, and then on Friday I’m going to get controversial about Jane Austen.  You’re intrigued, aren’t you?  (It’s not that controversial.  Well, maybe.)

Loving.  Although my trip to Boston was short and hectic, and I was a bit grumpy about going at all, there was a highlight – I got to visit with Katie!  I haven’t seen her in more than five years, and it felt so good to get hugs and a cup of tea from both Katie and Jeremiah.  For awhile, it didn’t look like it was going to work out, because work had me running around until after 9:00 p.m. on Tuesday, and I had an early morning meeting on Wednesday and other assignments to squeeze in.  But I was determined, and fortunately Katie is a night owl, so at 9:30 p.m. I found myself curled up on her sofa with a cup of peppermint tea.  She gave me the tour of her lovely new(ish) apartment, and we chatted as fast as we could about everything under the sun – books, family, Boston, D.C., politics, tea, work, you name it – for two hours.  I feel so lucky whenever I get to visit with a faraway blog friend (like when I had dinner with A.M.B. last May in Philadelphia) and I left Katie’s house drooping with exhaustion but beaming with the gladness that comes of two hours with a dear friend.  Thanks again for the tea and sympathy, dear Katie!

Asking.  What are you reading this week?