So the sun is setting on this decade and rising on a new one, with all the mixed feelings that brings – optimism, hope, maybe some trepidation, and the expected amounts of nostalgia for the past ten years.  A lot happened in my life in the 2010-2019 decade.  I had two babies, traveled to Europe twice, moved five times, changed jobs three times – and read consistently throughout it all.  And read a lot of really good books – books that engaged me, that made me laugh and cry (sometimes on the same page), books with characters that became friends, books I’d read a dozen times or more and books I read for the first time.  And while this seems like an impossible undertaking, I’m going to do my best to give you the best of the best here: one for each year.

2010: A Year in Provence, by Peter Mayle.  This was a light year of reading for me.  With two years under my belt at my first law firm, I was starting to do more complicated work and was focused on climbing the career ladder.  But I did read a bit, and the highlight has to have been reading Peter Mayle’s A Year in Provence as Steve and I actually traveled through Provence.

2012: Wolf Hall, by Hilary Mantel. My reading numbers took a big jump in 2012, which is surprising because that was the year I became a mother.  In many ways, it was a hard year – between pregnancy complications and an early delivery, I really needed a lot of comfort reading, but when I look back on my book choices, I read mostly contemporary literary fiction (which I like, but which isn’t all that comforting).  One book that stayed with me was Wolf Hall by Hilary Mantel (I also read Bring Up the Bodies in 2012, and rated both five stars on Goodreads).  Wolf Hall was a wonderful reading experience, but brings back additional associations for me, because that was the book I was in the midst of reading when we finally got the coveted NICU discharge.  I remember returning from the mothers’ lounge, Wolf Hall in one hand and a container of pumped milk in the other, to see Steve smilingly announce that the doctor had just signed Peanut’s discharge papers. 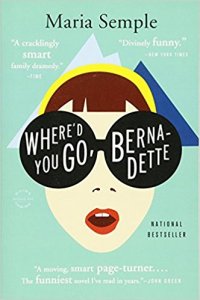 2013: Where’d You Go, Bernadette, by Maria Semple. This was a year of upheaval – our first full year of parenthood, and we pulled up stakes and moved from northern Virginia to Buffalo, New York.  The move was a huge adjustment for the whole family, and I’d be lying if I said I didn’t really struggle with it.  (You could probably have guessed that if you didn’t already know, because we moved back to Virginia just three years later.)  I took refuge in my beloved classics, re-reading old favorites like the entire Anne of Green Gables series and Jane Eyre and delving into Middlemarch for the first time (which I have since re-read).  But the book that has stayed with me was one that was everywhere in 2013 – Where’d You Go, Bernadette by Maria Semple.  I’ve read it multiple times since that first reading and it both makes me laugh and wrings out my heart.

2014: Crocodile on the Sandbank, by Elizabeth Peters. I had a lot going on in 2014 (seems to be the theme of the decade – more each year).  I started a new job, got pregnant with Nugget, and we moved to what we thought was our forever house.  With all of these changes, it’s no wonder I struggled through a reading slump for much of the fall.  But one very good thing came out of my 2014 reading: I met Amelia Peabody for the first time, in Elizabeth Peters’ The Crocodile on the Sandbank.  In addition to being a wonderful character, Amelia gave me another connection with my bookworm grandmama – I fell in love with Peters’ books independently, only to learn afterwards, from my mother, that Grandmama was a devoted Amelia Peabody fan.

2015: Dead Wake, by Erik Larson. It was hard to pick a book of the year for 2015; there were several candidates vying for the top spot.  All the Light We Cannot See, which was lyrical and gorgeous?  Station Eleven, which kept me company in several doctor’s office waiting rooms as my second pregnancy wound to a close?  Lumberjanes, Vol. I, which taught me that I could enjoy comics?  All solid candidates, but there was one book that held my attention and actually kept me riveted even through the fog of days with a newborn and a toddler: Erik Larson’s Dead Wake.

2016: To the Bright Edge of the World, by Eowyn Ivey. More upheaval!  After three years of trying to carve out a life and a place for ourselves in Buffalo, Steve and I decided it was time to go home, so we pulled up stakes again – moving first into temporary housing in January, and then back to Alexandria in July.  The move was a relief, but spending almost a full year without my books (they went into storage while we sorted out the final move, and then it took me awhile to get through my unpacking) was a total bummer.  I read some fabulous books, including my first Trollope (The Warden) and my first Persephone (Greenbanks) but nothing kept me riveted quite like Eowyn Ivey’s sophomore novel, To the Bright Edge of the World.

2017: Barchester Towers, by Anthony Trollope. Finally, after what felt like years of a nomadic existence, we stayed in one place all year long.  Work was hard and stressful in many ways, and I turned to books – as always – to keep me sane.  I read some great ones this year, but the best by far – not even a question – was Barchester Towers, by Anthony Trollope.  It was funny and entertaining, and the pages flew by; not something you expect from a Victorian doorstopper.  The best part, though, was reading it at the same time as my friend Susan, and discussing it.  There’s nothing like a like-minded friend to give even more spice to your reading life. 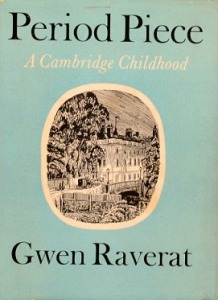 2018: Period Piece, by Gwen Raverat. I had a wonderful 2018 in books – revising old friends like Bernadette Fox, Catherine Morland and Anne Shirley, and exploring genre novels outside my comfort zone.  This is another one where it’s just hard to pick a “winner” – there were so many winners, which means the real winner is me.  North and South helped me through the loss of a beloved family member.  And 84, Charing Cross Road was a serious contender for my top spot, because books about books always hold a special place in my heart.  But ultimately I think the best reading experience of the year was also one of the first – a January book – Period Piece, by Gwen Raverat. 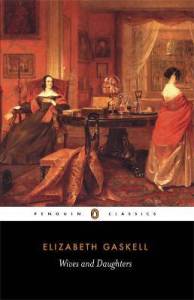 2019: Wives and Daughters, by Elizabeth Gaskell.  Bringing us to the year just ended!  I’ve churned through 124 books so far in 2019, which was high even for me – and there are still five days left in the year, so plenty of time for more.  Read through a lot of life ups and downs again, and turned to books for comfort whenever things just seemed to be getting really complicated – which did happen.  I read more classics than usual in the past year, which is how you can tell that I’ve been overwhelmed; that’s my comfort reading.  And it’s between two classics that I’ve had to struggle to name a book of the year.  I loved everything about the experience of reading The Eagle of the Ninth, by Rosemary Sutcliff, and I see myself revisiting her Roman Britain again and again.  But ultimately I think my book of the year has been Wives and Daughters, which cemented Elizabeth Gaskell as my favorite Victorian writer.

It was HARD to name just one top book to represent each year of the past decade!  But that’s a good problem to have.  I loved looking back on a decade’s worth of reading.  There were a few duds in there, but there were many, many more wonderful books.  Reading is a comfort to me in the hard times, and a joy always.

What were your books of the decade?

2 thoughts on “The Books of the Decade”