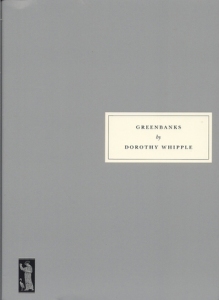 Greenbanks, by Dorothy Whipple, opens on Christmas.  The Ashton family has gathered at Greenbanks, the family seat, for the holiday.  There are the grown Ashton children – abrasive Jim; lovable black sheep Charles; trembling Letty and her imperious husband Ambrose; and spoiled baby of the family Laura.  There are the Ashton grandchildren – including four-year-old Rachel, most beloved of the group.  And they’re all gathered around Robert and Louisa, the matriarch and patriarch of the family.  On the surface, they appear to be a close-knit family, but the fractures and cracks in the veneer are almost visible.

Robert is a philanderer.  Everyone knows – Louisa included – and everyone turns a blind eye – Louisa especially.  Jim is constantly at war with Charles, whom he considers to be a no-good layabout.  (Louisa adores her boy and doesn’t see it at all – and personally, I found Charles lovable and Jim irritating, so I’m on Louisa’s side here.)  Letty, who wanted nothing more than to marry a man who was “solid” – everything her father, with his roving eye , is not – is now trapped in a loveless marriage and growing more spineless by the day, as Ambrose seeks to control everything his wife and daughter do in the name of propriety.  And Laura is on the verge of great happiness but is destined to throw it away in a fit of spite.

As picturesque as their Christmas appears, change is coming to the Ashton family.  It starts when Robert is thrown from his carriage while out with a young lady.  Louisa is widowed (and probably secretly a little relieved) but she remains the heart of the family.  But more change is coming – the Great War shakes the family to its foundations.  Louisa convinces an old friend of Letty and Laura’s – Kate Barlow – to join her as a companion, because she blames herself for Kate’s spectacular fall from society after being seduced by an older, married man.  Jim and Ambrose contrive to ship Charles off for distant lands twice, until he finally puts an end to their machinations by volunteering to serve his King in the armed forces.  Rachel grows into an intelligent, joyful young woman, but her father’s antiquated notions of what is proper for a woman threaten to stamp out her future before it even begins.

There are births, deaths, money lost and gained, loves parted and reunited, and at the heart of it all is an old woman struggling to remain relevant to her fracturing family, and the granddaughter who is her most beloved and the face of the family’s future.  Some characters get happy endings; others don’t – it’s like life that way, you see?

I can’t tell you how much I adored Greenbanks.  It’s one of those quiet novels in which nothing happens except people living their lives, being born and dying, and yet it is completely, utterly, all-encompassingly gripping.  I could not put the book down until I knew what was going to happen to each and every one of the Ashtons.  I raged when Ambrose tried to deny Rachel an education.  I sobbed when Louisa had to say goodbye to Charles (picturing my own Nugget, all grown up and leaving for another country, and no idea when I would see him again) and I sobbed again when he unexpectedly returned home, only to be driven away again.  I wanted to slap Jim and Ambrose and to shake the spite out of Laura.  I hoped extra hard for a happy ending for Kate.  But the true genius of the story is in Whipple’s characterization of Louisa and Rachel.  How often do you find a novel focused on the relationship between a grandmother and granddaughter in which both characters are so completely vivid and real and alive?  Watching Rachel grow up on the page, and watching Louisa love her, was one of the best reading experiences I’ve ever had.

Why don’t more people read Dorothy Whipple?  Why isn’t she better known?  (Greenbanks is the only Whipple stocked by my library system – which I suppose means I’ll have to place a Persephone order for some more.)  There were funny moments, certainly, but Greenbanks was not a funny book – or at least, it was no funnier than life itself.  (And life really isn’t all that funny.)  Whipple drew me so completely into the world of Greenbanks and its surrounding village that I felt like I was an Ashton – the characterization, and the set writing, were so spot on that I knew from the first chapter I was reading the work of a master.  Highly recommended to everyone and their mom.  Read it again and again and again.

Have you read any Dorothy Whipple?  Which of her other novels should I read next?